I love desserts of all shapes, forms, and fashions, but no pie, cake, or cobbler can hold a candle to banana pudding, at least not in the encyclopedia of Southern cooking. Not in my mind anyway. You will not go to a church potluck or a family reunion south of the Mason-Dixon line and not find a bowl heaped with vanilla pudding, bananas, and vanilla wafers. And honestly, when I think of Easter desserts, banana pudding is on the top of the list. Cold (my version, anyway-we’ll talk more about that in a minute!) and creamy, banana pudding hits on everyone’s desire for something a little lighter and fruitier than the rich chocolate desserts they’ve been gorging on all winter.

A survey of my Facebook followers found a pretty even split between cold and warm pudding lovers. I like things the way I like them…I suppose I will have to try it warm someday, but for now I think I’ll stick to cold banana pudding (my sister and her husband, whose mom makes her banana pudding warm, pointed out that warm banana pudding must be eaten immediately as it doesn’t keep/reheat well…so we’ll call it basic economics. Waste not want not.).

You guys know, though, that I can’t just make the Jell-O instant pudding + Cool Whip version that I grew up with. I mean, if someone makes it for me, I’m definitely going to eat it…but I wanted to make my banana pudding from scratch, with real whipped cream. A little something extra that my sister started doing is folding the whipped cream into the pudding to make a fluffy banana pudding. She gets a ton of compliments on her banana pudding…it’s pretty amazing. By the way, if you don’t like bananas (I know a lot of people can’t really deal with the texture) this pudding would also be delicious with pineapple or strawberries.

What’s your banana pudding vote-warm or cold? Comment below and let me know! Either way, I bet you’ll love my fluffy Southern banana pudding. 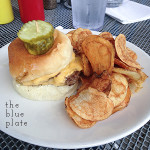 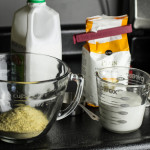