Homemade cheese may sound daunting, but I promise it isn’t. This easy saag paneer (spinach & cheese curry) is a delicious and filling dinner!

Raise your hand if you love spinach dip (raises hand).  I know spinach dip is a mid-nineties phenomenon, but man, I love that stuff.  The first spinach dip I ever had was at TGI Friday’s, which I thought was the most amazing restaurant back in my senior year of high school when I tried it for the first time.  I haven’t eaten there in years, but man, thinking of that spinach dip makes my mouth water.  Actually, it makes me wish I had some right now….

Why am I talking about spinach dip, you may be asking.  This, after all, is not a recipe for spinach dip.  However, saag is Indian for spinach (though this recipe is known as palak paneer in some places)…this is a recipe for, basically, a spinach curry with cheese.

I love spinach.  I have loved it since I was a small child-seriously.  When my grandmother would serve a vegetable that I didn’t like at dinner, she would always open a can of Popeye spinach for me, which I ate liberally sprinkled with ReaLemon juice (you know, the kind from a bottle?), and while I have never personally prepared canned spinach, the school where I taught for the first eight years of my teaching career used to serve canned spinach on a weekly basis and I was more than happy to eat it-nostalgia, I guess.  When I started dating Philip, he didn’t like spinach.  I quickly set to changing that sentiment….and I was quickly successful.  It’s a gift.  We eat spinach often, cooked, raw, and stirred into all manner of things (spinach dip included).

Back in the days when we had cable, I enjoyed watching the show Aarti Party, featuring The Next Food Network Star winner Aarti Sequeira (who first made a name for herself on her own blog, Aarti Paarti) and her fabulous Indian recipes.  Given my love for spinach, I am sure that you can imagine how much my interest was piqued when she debuted a recipe for an easy saag paneer.  Spinach, Indian spices, and homemade cheese?  Yes please.

Aarti’s easy saag paneer recipe lit me on fire, though.  I couldn’t finish the bowl.  When I saw a recipe for saag paneer on America’s Test Kitchen, I decided to try it.  While I liked the flavor of the curry itself better, it was way runny and the cheese was too soft.  So…I made it again, this time using Aarti’s cheese recipe and making some adjustments to the amounts of liquid in the ATK recipe (along with a few other adjustments as well).  The result?  Perfect.  I only use 1/2 of a jalapeño because I can’t take the heat…but feel free to use an entire pepper or something hotter, like a serrano (which is hotter than a jalapeño and is actually what Aarti’s recipe calls for).  Anyway, it’s delicious, especially served with homemade naan (Indian flatbread), which I made the first go-round on this recipe but didn’t have time to make the second time around.  Stacy’s Pita Chips are pretty good too!

Don’t be scared! Give my easy saag paneer a try!

More spinach from Chattavore: Spinach is my favorite vegetable, bar none. Here are some other things I’ve used it for….twice-baked spinach potatoes, spinach salad, spinach and artichoke pasta pie

Prep/Cook time includes time to make the paneer from scratch. If you use store-bought paneer, the prep time will be ten minutes and cook time will be 30 minutes. 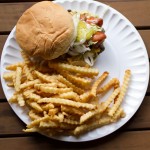 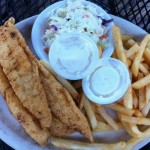