Burrito casserole, also known as Mexican lasagna, is a crowd-pleasing weeknight meal that can be customized for whatever your family’s tastes are!

Some days I just don’t feel very inspired to make anything new and interesting.  I make more pizzas than two people should eat, and Saturday mornings are a biscuits & gravy extravaganza around here at least three out of four weeks.  Going back to work makes this feeling even more acute, and the week before last I informed Mr. Haymaker that I would be requiring him to come up with at least one meal idea per week (I mentioned recently that he’s not much for meal planning).  Last Friday as I was doing my marathon grocery planning, I asked him for some ideas and he gave me two: taco soup and lasagna.

Taco soup is easy; putting some ingredients in the Crock-Pot and coming home to dinner makes me happy times infinity, especially since it can easily be frozen for one of those “oops, I forgot that essential ingredient and no way am I going to the store to get it” kinds of nights.  Lasagna, though….well, lasagna is just not a great meal for a family of two.  Not that I don’t love lasagna, but I’ve never made an honest-to-God meat and cheese lasagna for two people.  The only frame of reference I have is the massive casserole that my mom makes for our very large family.  There are lots of leftovers even then.  So I must do my research on a good for-two-to-four-people lasagna recipe.

I didn’t want to shoot down his idea, though, so my wheels started turning.  I guess I could do baked ziti….or maybe try baked spaghetti. The night that I was thinking about this, though, I was having a crazy Mexican craving so I guess that’s why I didn’t really care that I planned taco soup and this: Mexican lasagna.  I had something similar once at a friend’s house…taco-seasoned ground beef, a creamy cheesy filling, some sort of taco sauce, cheese, and tortillas as noodles.  I started cooking up an idea: flour tortillas, homemade enchilada sauce, taco-seasoned ground beef, corn, a blend of jack cheeses, and ricotta.  And boy oh boy, was it a good idea.

I found a great, simple recipe for enchilada sauce on the Vita-Mix website that I made the night before (I’ve included a modification in the recipe if you don’t have a high-speed blender); I also cooked the taco meat the night before, and since I’d done my prep work ahead I really only had about ten minutes of active prep the day that I made this.

I called this “enchilada casserole” up to the point that we were eating it, when I decided that since it was made with flour, not corn, tortillas that it was really more like a burrito that just happened to have some enchilada sauce on top of it…so instead I called it burrito casserole.  I realize it looks messy, a little gross even.  Trust me, burrito casserole is not gross.  It was delicious, and when we had the leftovers it had definitely firmed up a bit.  And it tasted even better the second day.

This burrito casserole is a crowd-pleaser!

For the enchilada sauce
For the Casserole 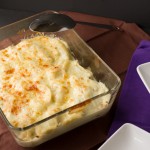 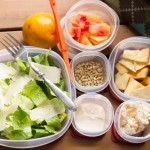