These mushroom and ricotta stuffed shells are topped with a creamy cauliflower sauce that tastes like a rich Alfredo. They’re a decadent and delicious pasta dinner!

Food disasters.  In my years of cooking they’ve mostly been centered around burnt pancakes, though there have been a few notable disastrous occurrences in my kitchen….like the time that Philip didn’t listen to my advice that “mashed potatoes need less milk than you think” and tried using cornstarch to thicken them before he ended up just boiling an extra potato.  Or the time we tried making BLTs with turkey bacon (ick). Or the time I used a whole 8-ounce container of gorgonzola cheese (because that’s what the recipe called for) in some grits and they tasted like death.

Or the time last month when I made a cauliflower pizza crust.  Have you heard of this?  It is a popular new approach to pizza that makes it gluten-free.  I’ve been wanted to try it for a few months now, but most of the recipes that I’ve seen have some exotic gluten-free flour that I don’t have on hand and didn’t want to buy for one application.  When I found one that contained cornmeal, I decided that making it ASAP was 100% necessary.

Everything seemed to be going okay.  The stuff is pretty gloopy so you have to spread it on the pan (on top of some parchment paper) and that’s kind of weird, but whatever.  You bake the crust first then top it and bake the toppings.  The crust kind of puffed up a little bit but overall looked done and I was pretty excited about it.  The first sign of trouble was when I sliced it and it appeared to be still mushy on the outside.  It was basically eggy seasoned cauliflower puree with a skin on the outside of it.  Still, I had high hopes for it….hopes that were quickly dashed.  And I had to eat it.  It was terrible.  Just terrible.  Perhaps it’s just me, or perhaps the “exotic” gluten-free flours taste better than cornmeal.  But this recipe…no. Just no.

Cauliflower garlic sauce though? Yes. Absolutely yes.  Perhaps it sounds strange, and I’ve never been one of those people who was like, “Oh yeah, you can mash some cauliflower and it tastes just like mashed potatoes!” Malarkey.  However, I was blown away after seeing a recipe for cauliflower sauce on Pinch of Yum.  Not long after she ran a recipe for cheesy garlic rice made with-you guessed it-cauliflower sauce!  Oh dear.  When you puree the cauliflower to a perfectly smooth consistency with some milk and garlic, you really can (almost) trick yourself into thinking that it’s garlicky alfredo sauce.  It’s thick and creamy and pretty much amazing!

This brings me to my most recent kitchen disaster.  I decided that I needed to make some cauliflower sauce and use it as a sauce for stuffed shells.  I decided to fill my shells with mushrooms, but unfortunately I didn’t really put much thought into what else was going to go into my filling.  I threw some white wine in, then hey!  Let’s put some blue cheese in there.

Again, no. Just no.  The mushroom & ricotta stuffed shells below are a second version.  Ricotta and parsley definitely suit this dish better than white wine and blue cheese.  The ricotta makes a perfect creamy complement to the mushrooms and the grated Swiss and parmesan cheeses are a delicious browned topping.  The garlic sauce is amazing, creamy without a drop of cream.  Yes.

Make these mushroom & ricotta stuffed shells!  What are your ideas for cauliflower sauce?

The cauliflower sauce recipe is from Pinch of Yum .

The prep time includes the time to make the cauliflower sauce. This can be made ahead and refrigerated or frozen. 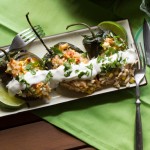 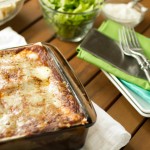