This potato galette with leeks & mushrooms is simple, filling, & vegetarian. If you make the pastry ahead of time, this is within your reach on weeknights.

Last fall I purchased The Smitten Kitchen Cookbook, written by Deb Perelman, author of one of my favorite food blogs, Smitten Kitchen (duh). I’ve shared a few of Deb’s recipes here…she blogs about food that is simple and classic and pretty much perfect. When I got her cookbook, I spent a full month reading through it over and over and over again and making as many recipes as I possibly could. One of the recipes was a butternut squash and sage galette. Since then, I’ve been trying to think of my own galette recipe, and this weekend, potato, mushroom, and leek galette was born.

What’s a galette, you ask? Not a Gillette. Not the best a man can get…but possibly the best a man can eat (sorry, I had to. I know it’s a terrible, terrible joke). A galette is basically a flat pie. It eliminates a lot of the troublesome aspects of a pot pie because, hey, you don’t need a pie pan! And you can pretty much load it up with whatever you want, so it’s actually a perfect vehicle for cleaning out the refrigerator.

That’s not what I did this weekend, though. Initially, this was to be a mushroom and leek galette. I love mushrooms and leeks together…but for some reason the combination didn’t seem substantial enough for me and I was certain that we would be hungry again within an hour…so I turned it into a potato galette with leeks and mushrooms for flavor and texture. This potato galette with leeks and mushrooms was a good decision, especially wrapped up in Martha Stewart’s cornmeal pâte brisèe. The tiniest crumbling of blue cheese completed the potato galette for a delicious, easy flat pie that I’m pretty sure will become a staple in my house.

Have you ever made a galette? You should try this potato galette!

For the Pate Brisee (pastry crust)
For the Galette

The pastry makes enough for a double crust pie. Refrigerate or freeze the unused half. The cook time is mostly inactive baking time. 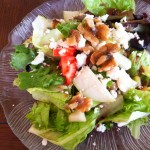 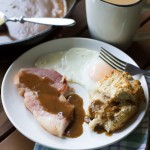