Jenny records all of her dinners in a journal. She’s done this for years and years. For her, dinner is about family, about being home to eat dinner with her children every night. She and her husband tag team their meals and have created a great collection of go-to dinners as well as an impressive collection of more adventurous dinners. She provides “deconstruction” strategies for families with picky eaters. She also writes a great narrative about how the eating habits of families change as children get older. Her blog is just as good as her book (and she recently released a second cookbook, Dinner: The Playbook, which I haven’t read yet).

9. The 100 Days of Real Food Cookbook by Lisa Leake

Okay, so I just got this cookbook a week and a half ago, but I’ve already made several recipes from it. I can tell it’s going to be a great resource for me as I work (and you all know that it’s a constant growing process) to eat better. The book details how Lisa’s family went from eating a fairly typical American diet to eating a diet free of highly processed foods (I use the term highly processed because, as Lisa points out, cooking is form of processing too) as well as tips for implementing a real food plan of your own. There are recipes for every meal of the day, including a school lunch-packing chart. That alone might be enough for all you lunch-packing parents to go out and pick this book up! Of course, you can find tons of recipes and info on the 100 Days of Real Food blog as well.

With Ruhlman’s ratios, you can cook just about anything. Local Milk once referred to the ratios as a talisman, and I have to say I agree with her. You can multiply or divide the amounts according to how much you need and add flavoring as you see fit. The book touches on baking, pasta, sauces, and custards. The cover of the book is a handy little chart of all the ratios and you can adjust which flours, fats, liquids, and flavorings you use-just don’t change the ratios. It couldn’t be more simple. One of these days I hope to commit the ratios to memory, but sadly it hasn’t happened yet (maybe I should just print a copy of the cover and hang it in my kitchen?).

7. Ad Hoc at Home by Thomas Keller (with Michael Ruhlman)

Chef Thomas Keller is the infamous proprietor of the French Laundry, Bouchon, and ad hoc. The Yountville, California-based ad hoc features a set menu of Keller’s classed-up versions of home cooking-fried chicken, beef stroganoff, and the like for around $50 a head. Now, if you all are like me, you’re probably not going to be paying $50 per person for dinner very often….but you can make it for yourself. Ad Hoc at Home is beautifully designed and photographed. It’s a gigantic book, as all of Keller’s are, but worth every centimeter it takes up on my shelf just so that I can get Keller’s take on chicken & dumplings and read his very touching account of planning and cooking his father’s last dinner.

When I saw this 1967 copy of Julia Child’s magnus opum on the shelf of a used bookstore that Philip and I used to frequent, I knew that we were meant to be together. If it weren’t for Julia, I have no doubt that the world of cookbooks, blogs, and food television would be different today. She defined modern home cooking, at least in my opinion. Julia, Simca (as she called her friend), and Louisette penned a definitive book on French cooking that still holds up today. Julia worked exhaustively to make sure that the book was set up in an attractive way that was friendly to the servantless home cook (her words) and she accomplished just that.

The Lee Bros. are real, true Southerners. That’s the most important factor when you write a cookbook about Southern food. They approach it with great reverence, as opposed to just writing some drivel about how all Southerners eat is fried chicken. You guys know how I hate that. They really get down to the roots of Southern cooking, telling real stories about real people and places (particularly South Carolina, from whence they hail) and history of Southern cuisine. The cookbook is huge. It’s definitely my Southern cooking reference of choice.

When I started watching Mad Hungry on the Hallmark Channel a few years back I had no clue who Lucinda Scala Quinn was. Turns out LSQ is one of Martha’s people-her executive food editor, to be exact. One must be good to get that job, so I was sold. I loved Lucinda’s easy approach to cooking for her family (her husband and three sons). Her food was flavorful and accessible. When I got her cookbook, I fell in love with many of the recipes. My cream cheese pie crust is adapted from Mad Hungry, and I haven’t found a pancake recipe that I love more than hers. Sadly, her show doesn’t air on Hallmark anymore (though I don’t have cable so I couldn’t watch it anyway) but you can catch clips on YouTube.

Most of you that have been reading Chattavore for a while know that Alton is my cooking idol. He actually comes to Chattanooga for events from time to time and I keep wishing that someone would say, “Oh, hey Alton! There’s this really cool food blogger chick that lives here. She is totally obsessed with Good Eats, but not in a creepy way. We should totally invite her to our event. For free.” It hasn’t happened yet, but I am confident that it will. Anyway, Good Eats Volume I: the Early Years, Volume 2: The Middle Years, and Volume 3: The Later Years provide science, history, flavor, and practicality info. Good Eats was the show that made me love Food Network. If you read the books, you’ll understand why.

1. The Smitten Kitchen Cookbook by Deb Perelman
So, not very surprisingly, my favorite blogger is also my favorite cookbook author. I preordered The Smitten Kitchen Cookbook from Amazon and since I’m a Prime subscriber I got the book in the mail on the day it was released. I don’t even remember how far ahead I ordered it, but it was a long time and I was on pins and needles until it arrived. I then proceeded to read the book cover to cover three times in two weeks (because I read cookbooks as if they are novels). I couldn’t put it down. Even after I did put it down, I couldn’t stop cooking from it. I have probably made more recipes from The Smitten Kitchen Cookbook than I ever have from any other cookbook. White bean and pancetta pot pies, Passover brisket, apple cake, French toast casserole, and my obsession: salted brown butter Rice Krispie treats. Those are just a few of the recipes that I’ve made from Deb’s book. And she’s publishing another-amen and amen.

Also, today is National Chocolate Milkshake Day! Philip and I like our milkshakes bitter with as much malt powder as you can possibly dissolve in them. I know a lot of people that can’t stand malt. It’s all personal taste, of course. I was hoping to find a recipe for a chocolate milkshake in one of the aforementioned cookbooks, but can you believe there were none to be found? So, I give you my own recipe (if you can really call it a recipe).

What say you-malt or no malt?

Chocolate Milkshake (Malt or No Malt) 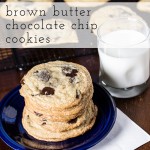 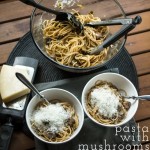 Pasta with Mushrooms and Cream Sauce