If you had told me ten years ago that I would be cooking and writing about it, baking my own bread, and making my own cheese and yogurt (!) I would have had a good laugh at your expense.  When I walked into my first real (i.e. non-dorm apartment) kitchen I was armed with three cookbooks and a few kitchen tools, some that we each had before we got married and some that we received as wedding gifts.  The meals we ate in the beginning were easy, to put it mildly: Hamburger Helper, Homestyle Bakes, spaghetti, tacos, and the occasional random attempt at making something from one of those cookbooks.  I knew how to cook (I had learned as a teenager when I often cooked dinner before my mom got home from work), and in fact had spent my freshman year of college wowing my roommates and my friend Brooke with my MAD kitchen skills (from scratch chicken fingers we ate with copious amounts of Naturally Fresh honey mustard-I could have consumed that stuff through a straw)….but it just didn’t interest me all that much.  But then….something happened that awakened my inner cook.

I started watching Style Network.  And on Style Network….there was this woman, a British woman, a phenom if you will.  Her name was Nigella Lawson, and she was a food writer turned television cook with a BBC show called Nigella Bites.  I was hooked, and devoured every episode feverishly.  She cooked a lot of things I had never heard of, and she made it all look and sound so good.  Watching Nigella led to watching Rachael Ray (a practice I have since abandoned, although I do still give Rachael some credit for my early interest in food) which led to watching Alton Brown….and it was all over.

This is the cover of one my my Nigella cookbooks. Who knows where I’d be (food wise, anyway) if it hadn’t been for Nigella!

My kitchen is well-stocked, with carefully chosen appliances.  I am a freak for cooking with gas, which is hilarious since when Philip and I moved into this house we were both perplexed by the gas range.  Now….I’d have nothing else.  This one has cast iron grates. Do you understand what that means?  Sheer wonder, that’s what!  Or at least no more burnt-on goodness.  The grates on my old stove were scratched  to bits.  My cookbook collection has expanded, to say the least.  I haven’t cooked Hamburger Helper or a Homestyle Bake in years (not that there’s anything wrong with that!).  Suffice it to say that I have grown somewhat in my knowledge and interest in cooking and food.

I love cooking with gas. It’s what all the cool kids do!

Needless to say, my cookbook collection has expanded a bit. And this is pared down (out with the old, in with the new….what will I add next?)!

Good Eats isn’t on television anymore, and even if it was….we don’t have cable. Alton Brown will always have a special place in my kitchen, though!

I started thinking about it the other day, though.  Wondering why I like to cook so much.  What is it about the act-the art-of cooking that moves me so? It’s not just something I do so that we can eat.  It’s a necessity, and it’s an obsession.

First, I cook to be connected to my past.  My grandmother was a fantastic cook, probably the best I’ve ever known.  With rare
exceptions, she was in the kitchen seven nights a week.  She carefully followed recipes, even perfectly measuring and rolling her chocolate chip cookies into balls so that each cookie would be the same size.  She refused to have a microwave in her house.  She used some convenience foods, like bread-that was just what her generation did (she was a fifties housewife) but there was no Hamburger Helper.  Because both of my parents worked, we ate dinner at her house probably four or five nights a week.  She passed away when I was fourteen, before I was smart enough to know that I should get in the kitchen and learn from her.  So, while I didn’t get that experience, I know that so many of my traits as a cook came directly from her, and I feel connected to her every time I am in the kitchen.  Unfortunately, she hated to be photographed, so I don’t have many pictures of her….and she would hate to know her picture had been posted on the internet for all to see-so I’ll refrain.

Next, I have never, ever, ever been a risk-taker.  I like to play life safe, and I follow rules (those are typical symptoms of being the oldest child, by the way).  I am not adventurous.  I have been afraid of heights since I was old enough to be aware of heights (ask me about the ropes course debacle sometime).  Cooking, however, gives me an outlet to be adventurous.  Of course, there are some rules for cooking that cannot be broken, but so many more that can.  What will happen if I do this?  If I add this?  If I leave that out?  For someone who has never taken a real “life” risk in my life, cooking gives me the opportunity to have a little adventure, in ways that I am sure that many “adventurers” would never have the nerve to try.

Finally, the other symptom of “oldest child syndrome” is maybe the most important reason I cook.  I am a complete and utter perfectionist.  No one expects me to be perfect, and of course I am far from it, but that doesn’t stop me from expecting it from myself.  I have beaten myself over every “bad” grade (read: B) I have ever gotten in my life and, while there is no way that I could ever have a “perfect” day in my classroom, I blame myself (no one’s to blame, by the way) for everything that goes wrong.  The things I can’t do (sing, keep my house spotless, have a weed-free yard, to name a few) frustrate me to no end.  So, I cook.  When I first started cooking, I would have what is known around here as a “food tantrum,” which consists of tears and throwing things (not at anyone!) for any botched attempt to make something.  I am NOT kidding.  Philip has been the unfortunate witness of many of these tantrums….but I am happy to report that I haven’t had one in about four years.

While many might see my ambitious kitchen projects as just another attempt at perfection, I see them as something different.  They are a way to deal with my perfectionism-therapy, if you will.  I have learned to laugh when my yogurt doesn’t thicken, when I forget to put salt in the pizza dough, when the ice cream doesn’t freeze (this happened Sunday, by the way).  Last week, I made some mayonnaise and had to throw out the entire batch the next day because it separated, and even Julia Child’s “foolproof” (apparently not) trick for saving separated mayonnaise didn’t work.  I tossed it, shrugged, and bought some Hellman’s the next day.  Food, like a child, doesn’t always behave, and it is only partially under your control.  It does what it wants.

So, those are the reasons I cook.  Let’s see where it takes me. 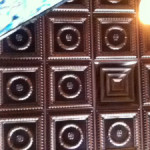