I learned how to cook as a teenager.  My brother and sister were elementary-age, my dad was a long-haul truck driver and was out of town during the week, and my mom didn’t get home till 6:30 or so.  I would start dinner many nights, often spaghetti, tacos, a roast, or chicken taken from a bag of frozen tenders or breasts.  I wouldn’t say I enjoyed it necessarily, but I did enjoy the (at that age) rare knowledge of how to actually prepare a meal that didn’t involve a drive-thru.

It seems so odd, so foreign, to me now that when Philip and I were dating we really did not cook very much at all.  I recall the first meal I cooked with him with a guffaw, if you will.  It was a gigantic pan of lasagna, Caesar salad from a bag, frozen garlic bread, and an attempt at apple crisp that did not, in fact, crisp on top.  Philip referred to it as “apple sog”.  Thank God I knew him well enough to understand his sarcastic sense of humor, because we had only been dating for about a month and making fun of my cooking could have been a deal breaker.

So….getting married and moving in together presented some interesting challenges.  WHAT would we eat?  I owned three cookbooks, my Better Homes and Gardens Cookbook and two really crappy “cooking for two” books that I had picked up at McKay.  They were not much help, although I do remember an elaborate New Year’s Eve dinner in that first apartment that consisted of homemade tomato-basil sauce and homemade French baguettes (all from the Better Homes and Gardens book, which is a good cookbook-I still own it-but I wasn’t very skilled in the kitchen or very good at using the leftovers from all the meals that “served 4”).  Suffice it to say, we ate a lot of Hamburger Helper and Homestyle Bakes.  Do Homestyle Bakes still exist?  They were these meals that consisted of opening a can of some meat & gravy combo, dumping it into a baking dish, scooping some bready mixture on top, and baking.  Gross.  I shudder just thinking about it.

Then came Nigella Lawson.  Oh, Nigella.  I had attempted to watch some Food Network, but 30 Minute Meals with Rachael Ray was the only thing that really appealed to me at the time (this was 2001 and there just. wasn’t. much. on. Food Network. though apparently I just missed Good Eats?).  However, Style Network had this beautiful British woman that cooked all kinds of interesting foods like, you know, it was just no bigs.  Oh, Nigella.  I watched her show, Nigella Bites, constantly, every time it was on, watching the same episode over and over, eventually watching every episode.  I still miss that show.  She’s had others and, while some of them have been pretty good, none of them have been Nigella Bites.

Before Nigella, I had never heard of risotto.  Now, it’s an easy weeknight staple for us.  This risotto is really not even a recipe.  It’s just something I threw together.  The pasta is adapted from Nigella’s book Nigella Kitchen, in which she details the real foods that she cooks for her family.  This struck me as a true quick meal….truly “no bigs”. 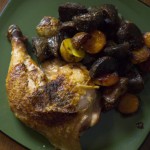