3/31/13 During a trip to the North Shore this weekend we saw that Urban Spoon has closed.

Saturday Philip and I decided to venture down to the North Shore to try out The Urban Spoon. The Urban Spoon is a little hole in the wall in the former location of Chattanooga Sandwich Company. I had heard great things about their Sunday breakfast buffet, so I checked out their online menu and it seemed to fit the bill of the type of food we were in the mood for that day.

I was worried that it may be crowded and we would have to wait for a long time, especially since we were pretty much starving. No worries…we were seated immediately. I took quick note of the specials on the blackboard when we walked in-a smoked salmon salad, cottage pie and mixed green salad, and “chicken pot pie” soup before I checked out the menu, which included a soup/salad section, an entree section (including sandwiches), and a dessert section.

Philip decided to try a cup of the Suck Creek stew. The menu description reads, “Smoked sausage, chicken, black-eyed peas, onions, and smoked ham hock. Can you say….suck-u-l-e-n-t!” It was indeed tasty-nice and smoky. I only took one bite, so I didn’t taste the spiciness, but Philip told me that it was spicy, presumably from the smoked sausage. When the soup came out, a couple of cornbread muffins accompanied it. I’m not going to lie to you here-the cornbread was good, but it wasn’t “my kind” of cornbread. It was sweet, and I prefer my cornbread “unsweet”. It was also a little drier than what I make. I ate my muffin, but, my friends, it just wasn’t as good as my own. I’m a little biased! 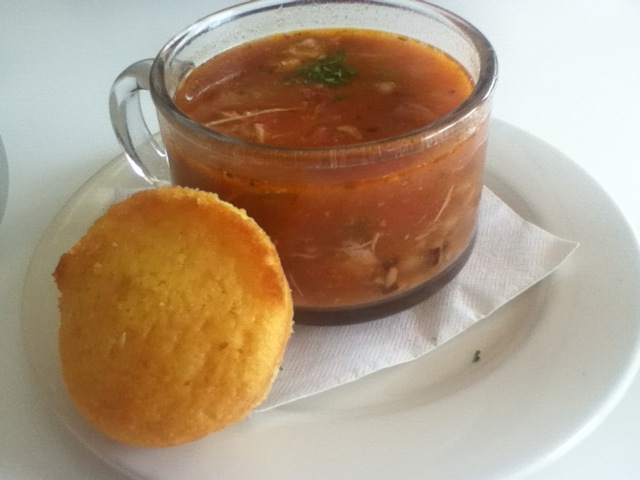 For his entree, Philip chose the Georgia Pecan-Crusted Chicken, described in the menu like this, “This dish became famous when we were the wedding caterers from hell! Fresh sautéed chicken breast smothered in seasoned pecans and baked to delightful tenderness. Served with wild rice pilaf, sweet gingered carrots, and drizzled with Honey Mustard.” Amazing is all I can say. The pecans were deliciously toasted and completely coating the chicken, making it as crispy as if it had been fried, and the honey mustard lent a perfect and not overpowering sweetness to the chicken. The rice was perfectly seasoned and made me a little jealous. I haven’t perfected a great non-fried rice recipe. I must figure out their secret. The gingered carrots were indeed sweet and gingery, but not too much so. Ginger can be a very strong spice if overdone, and this was not. This dish was pretty much perfect. 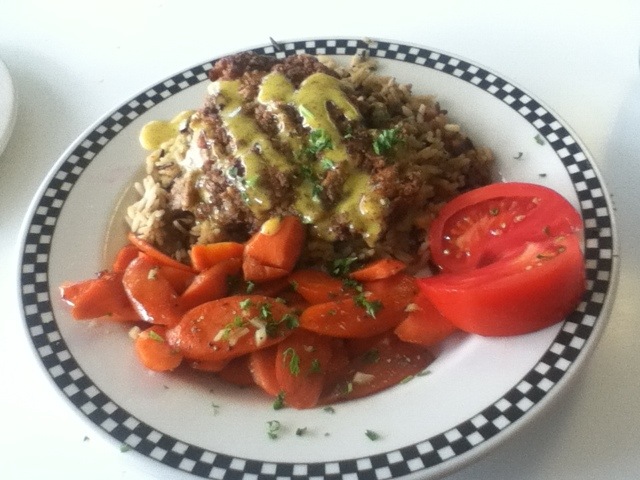 I decided on the cottage pie special with vidalia onion dressing for my salad.  In case you don’t know what cottage pie is, it’s shepherd’s pie made with ground beef (and if you don’t know what shepherd’s pie is, it’s a thick stew made with ground lamb and vegetables and baked under a mashed potato “crust”).  Some people and restaurants make their stew tomato-ey and others make it more gravyish.  I personally make mine gravyish, and I was glad that The Urban Spoon did so as well.  I did think that the stew was just a tiny bit saltier than I would have made it, but it was still delicious, with green beans, corn, peas, and onions mixed in.  The mashed potatoes tasted great on the pie as well as by themselves.  The salad was made with mixed greens, a tomato wedge, a red onion slice (which I removed, of course, after taking the photo), a big slice of pickled beet (which I ate even though I think beets smell like dirt-look at me trying new things!), and a pimento-stuffed green olive.  I chose the vidalia dressing over ranch and raspberry vinaigrette since it was “different”.  I’d only had vidalia dressing once, at another local restaurant which is well-known for theirs, and didn’t like it.  That was not the case here.  The dressing was great.  The meal overall was great! 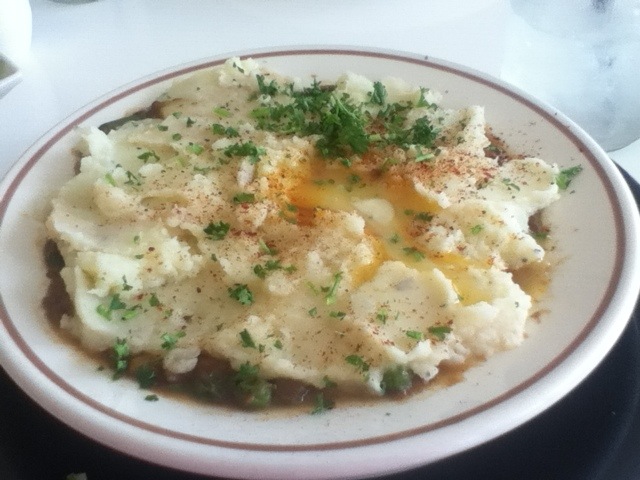 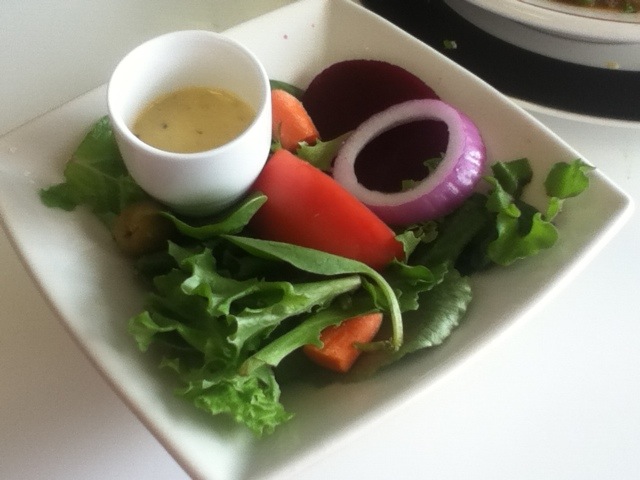 By the way, aside from one slightly eye-jarring wall, the decor inside of The Urban Spoon is nice, spare but not lacking, with paintings of local scenes (I assume by local artists) hanging on the wall (and available for purchase!). As you walk by, you can see into the kitchen, which is always nice. I was very pleased with this experience, and I will definitely be back, hopefully on a Sunday morning next time!

The Urban Spoon is located on Chattanooga’s North Shore at 207 Frazier Avenue, Chattanooga, TN 37405. You can reach them at 423-710-3252. Check out their website, http://www.urbanspoonchattanooga.com, and their Facebook page.

Brownies You Should Make!