Tupelo Honey Café Chattanooga opened last month at Warehouse Row.  It has been much hyped (at least in my Facebook feed!) and I was anxious to check it out.  We ate at the original Tupelo Honey in Asheville, North Carolina a few years back and were pretty impressed by the BLT and the sweet potato pancakes.  It’s now a chain, but since it’s still regional and small I decided that it still fit into the confines of Chattavore.

I was a little nervous about crowds since it’s downtown and still fairly new, so we decided to go early.  We arrived at a few minutes after 5 p.m. on a Wednesday night and were immediately seated.  Since the weather was perfect-o, we decided to sit outside.  Our server, Leslie, greeted us quickly and took our drink order, suggesting fried green tomatoes (served with goat cheese and basil) or cheesy grit cakes as an appetizer, but we decided against ordering an app (besides, I probably would have gone for the pimento cheese and tortilla chips if I had wanted an appetizer).  Every diner gets a biscuit with blueberry jam and honey (Tupelo honey, I presume).  The biscuits were pretty good but the jam was great-not too sweet, not too gooey…just perfect.

Tupelo Honey serves breakfast all day.  I really wanted the Eggs Betty-“two free-range, medium-poached eggs on a biscuit with all-natural city ham and homemade lemony hollandaise”-but that’s the one breakfast item that they don’t serve all day (they stop serving it at 2 p.m.).  The fried egg BLT-“two fresh, free-range eggs prepared over hard, two strips of maple peppered bacon, lettuce, tomato and smoked jalapeno aioli on our exclusive sourdough wheat”-sounded pretty good too….but I decided I didn’t want breakfast.  I flipped back to the entrées, where I seriously considered the vegetable plate (three of the veggie sides for $9.95 or four for $12.45)…but then I noticed Shoo Grill Cheese, Have Mercy Served with a Big Hearty Mug of Soup-“Havarti, pimento cheese, caramelized onions, maple peppered bacon, all natural city ham, fried green tomatoes and fresh basil served on our exclusive sourdough wheat bread”, served with tomato soup or cheesy onion bisque, which Leslie described as sort of like a creamy French onion soup.  I decided on the bisque and also ordered a side of the brown butter Brussels sprouts.  The sandwich was large and very, very messy.  There was a lot going on so I couldn’t really tease out the flavor of the pimento cheese, but all of the flavors worked really well together.    I really enjoyed the soup.  The onions were perfectly soft and worked wonderfully with the creamy broth, which didn’t have the overly salty flavor that many restaurant soups have, and the croutons floating on top were crispy and delicious. The flavor of the Brussels sprouts was good, but I did feel that they needed a little salt….and, well, in my opinion, Brussels sprouts always benefit from the addition of bacon.  Sue me.  They’re not as good as mine (my husband said so!).

Philip though about ordering the sweet potato pancake-“one large buttermilk pancake flavored with cinnamon and sweet potatoes, topped with whipped peach butter and spiced pecans”-but, like me, decided against breakfast.  Shrimp & grits is one of his restaurant go-to items, but the menu item he looked at-Shoo Mercy Shrimp & Grits-was $22.95.  Upon perusing their menu, it appears that they have two versions of shrimp and grits-Brian’s Shrimp and Grits-seven large shrimp served over Goat Cheese Grits and anointed with a spicy roasted red pepper sauce ($15.95)-and Shoo Mercy-Chef Brian’s Shrimp and Grits – and then some. A dozen shrimp with bacon, carmelized onions, spinach and sautéed mushrooms over Goat Cheese Grits.  Oh well-next time.  He decided to get the Southern Fried Chicken Saltimbocca with Country Ham and Mushroom Marsala-“crispy fried natural, hormone-free chicken breast topped with country ham, melted Havarti cheese and basil. Served with a mushroom marsala sauce, cheesy smashed cauliflower and a fresh asparagus garnish” for $15.95.  He loved the chicken, which was a boneless chicken breast, perfectly fried, with cheese melted on top, mushroom marsala gravy poured over, and bits of country ham sprinkled on top.  The cheesy mashed cauliflower was really tasty, cooked till tender and combined with cheddar cheese, and I really liked the asparagus, which was very, very lightly steamed and just a little undercooked for Philip’s taste (he doesn’t like asparagus quite as much as I do!).

When Leslie mentioned dessert, we were all ready to decline until she mentioned brown butter pecan pie.  Pecan pie is Philip’s second favorite dessert (after crème brûlée), and theirs is served with vanilla bean and caramel sauce, so we decided to get a slice to bring home and eat later that night.  Sorry, I forgot to take a picture!  It was tooth-achingly sweet but still quite good, with the brown butter adding a nice richness to the filling.  Good but not the best I’ve had.

At around $40 pre-tip, this was definitely not an inexpensive dinner out.  We liked it but it definitely won’t be a regular destination for us, especially since Southern cooking is one of my specialties so I could recreate the things that we ate there for a lot less than forty bucks (and perhaps I’ll check into the Tupelo Honey Café Cookbook to help me do just that).

Still, if you’ve been itching to check it out, Tupelo Honey Café Chattanooga is definitely worth a try. 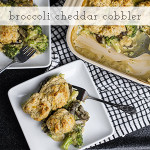 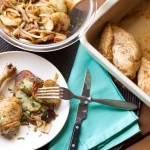