Toscano Italian Grill is an unassuming Italian restaurant located in a strip mall in Chattanooga, TN with huge portions and surprisingly tasty food.

It has been a while – probably a couple of years – but I posted on Facebook asking readers about their favorite pizza in Chattanooga and was surprised by one of the answers: Toscano Italian Grill. I actually had to ask where it was located, because I had never heard of it. As soon as I was told that it was located in the strip mall on Lee Highway, I knew exactly where it was, but I’m rarely in that area so it took me ages to get out there.

Philip and I arrived at Toscano Italian Grill at around 4:00 on a Saturday afternoon and the place was empty. We were greeted by Haili as soon as we walked in the door and she led us to the seating area and let us choose our own table. Toscano looked basically like every strip mall restaurant I’ve ever been in: clean but basic. I will be honest, I didn’t expect much because I have had very bad experiences with trip mall Italian restaurants, pre-blog (those places are long defunct).

Haili filled our waters while we perused the menu. I had read several Yelp reviews that mentioned the Italian nachos at Toscano Italian Grill, so we decided to order those for $7.99. They were made from pita chips topped with Alfredo sauce, mozzarella cheese, chunks of grilled chicken, and pickled jalapeño slices. They were pretty tasty, though honestly, if I were making them at home I would probably leave off the chicken or cut it into smaller chunks. I loved the concept and may have to recreate it for the blog. Haili told us that the Toscano twisters (pizza rolls stuffed with mozzarella and a topping of your choice for $6.99) and the garlic knots ($5.99) are also fantastic.

Our entrees came with a Toscano salad (lettuce, tomatoes, onions, green peppers, and shredded carrots) or Caesar salad and garlic bread. We both decided on the Caesar salad, which was pretty basic: chopped romaine, shredded Parmesan, pre-fab croutons, and Caesar dressing on the side. It was good but there was nothing spectacular or “special” about it. The garlic bread was pretty much along the same lines: buttery crusty bread with garlic seasoning.

I was torn between the New York style pizza (a small – 10 inch – pizza starts at $7.99) and the baked penne. I ultimately decided that I was in the mood for pasta, so I decided on the baked penne with a creamy pink sauce, meat sauce, meatballs, or sausage, and cheese for $10.99 (I ordered mine with meatballs). I actually thought it was very, very good. The sauce was a nice balance between creamy and tomato-y, the pasta cooked to al dente, and the blanket of mozzarella….well, I love mozzarella, and there was plenty in every bite. The meatballs were good too, tender and well cooked, but honestly, I would have been just as happy with this as a meatless dish. This portion was large enough for a whole family and we brought home enough leftovers to feed both of us for lunch the next day.

Philip decided to go way out of his comfort zone and order the fruit de mari ($13.99): shrimp, calamari, chopped clams, and baby scallops cooked in a spicy marinara sauce served on top of spaghetti noodles. He typically doesn’t care for calamari and is sort of indifferent about clams, but he wanted to try something different. He said that on its own, the calamari was chewy and not great (because it’s calamari) but when he ate it with the pasta and sauce that it all paired together really well and he actually enjoyed it. One note: there was a ton of oil in this, which made it a little heavier than you might expect a seafood and marinara based dish to be.

It was before dinner time when we were there, but while we were dining a few more tables filled up and we heard Haili taking multiple orders on the phone as well. Toscano Italian Grill seems to be doing well. Like I said, I wasn’t expecting much, and I was pleasantly surprised. Was it Alleia or even Tony’s? Of course not. Was it perfectly tasty Italian food? Sure. I’m going to have to run by here on a work day and grab a small pizza for lunch so I can try it out (if I do, I’ll be sure to post an update).

If you’re in the Lee Highway area and looking for somewhere to eat, Toscano Italian Grill is worth a try! 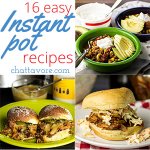 Easy Instant Pot Recipes for Back to School 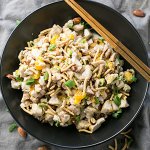