As I mentioned in my Serendipity Cafe, we attempted to go to the Rice Boxx last month.  Unfortunately for us, we went on a Monday night, and they are closed on Mondays.  So, this past weekend we decided to go there for lunch on Saturday.  In case you didn’t know, The Rice Boxx is located in the Bi-Lo complex in the Lupton Drive/Rivermont area.  There were not very many people in the restaurant, so we were seated immediately.  Our server quickly took our drink order and left us to peruse the menu.

The menu is pretty large with a section for Chinese/Thai and a section for Japanese (including a section only for sushi).  I’m going to be honest, I am always a little bit suspicious of places that serve several different types of Asian cuisine under one roof….but I was a sport.  One thing that I noticed that I found interesting was that, while they had a kids’ menu, the items on the menu were not typical kids’ menu items…they were child-sized portions of some of the items off of the regular menu.

We ordered a Thai spring roll (vegetarian) and a pork egg roll to start our meal.  Turns out that Philip’s meal came with a spring roll, so we did not have to pay extra for that.  As we were eating the rolls, we simultaneously noticed that there was no pink meat in the egg roll.  I cannot stomach pink meat in egg rolls.  That just screams processed to me, and I assume that the pink hue comes from the “pink” curing salt (nitrites) that are used.  Anyway, this egg roll just had plain old ground pork.  The rolls were both very crispy but not mouth-searingly hot (hot enough to be well-cooked but not hot enough to remove the skin from the roof of your mouth).  My favorite was the spring roll, with its rice noodles and cabbage and flaky rice paper wrapper…but that’s just me.

I decided to order off of the “Japanese” section of the menu so I ordered teriyaki chicken and shrimp (menu options are available as hibachi-with soy sauce-or teriyaki-obviously with teriyaki sauce) with fried rice and white sauce (ginger sauce is also available, but I’ve never been a fan….and I have openly declared my love for white sauce here before).  The server got mixed up and brought me chicken and steak, but the error was quickly corrected.  I probably won’t bother with the shrimp again….it was a little bit chewy.  The chicken was nicely done with no fatty or chewy pieces, and there were a lot of vegetables on the plate, which was nice.  The rice was cooked nicely, but it was bland…forcing me to douse it with copious amounts of soy sauce.  I can’t deal with underseasoned foods!  I did like the white sauce….actually, I liked it more than Ichiban’s or Kyoto’s, but not as much as Typhoon’s or the sauce I make myself.

Philip decided to order General Tso’s chicken off of the Chinese/Thai menu.  He got this with fried rice, and it also came with broccoli and soup.  He decided on egg drop soup, which came with a bowl of fried wonton strips (which I happily helped him eat-I love those things!).  His comment about the soup was, “Tastes like egg drop soup.”  Thanks for the description.  Wow.  We cracked up at his plate when they brought our meals out….it was a gigantic pile of chicken, a mound of rice….and three broccoli florets.  I was concerned that he would gorge himself on broccoli.  But anyway….Philip too thought that the rice was bland, although he does not love soy sauce like I do and just ate it that way.  He said that the broccoli was underseasoned (unseasoned?) as well, and only ate one piece (I needn’t have been worried).  He did really like the chicken, which I tasted.  General Tso’s chicken (which is an Americanized Chinese dish that you would not find in China-but then, aren’t most of them?) is usually similar to sesame chicken but with a slightly spicier sauce.  I could taste the chilies in the sauce, but it was not overpoweringly spicy.  Philip’s favorite thing about it was that while it was sweet, it did not have the usually tooth-aching quality you find in most Chinese restaurants.

If you decide to visit the Rice Boxx, you should definitely visit the restroom.  The hallway leading to the restroom has a flashing light that changes colors…red, yellow, purple, orange, blue, green….very kitschy.  It made me feel like I was trapped in an eighties horror flick.  Too funny.

So, the verdict is that The Rice Boxx is not my favorite, but it definitely wasn’t bad.  The prices were decent, as was the amount of food that we got.  On this day, seasoning was a bit of an issue….and I wouldn’t bother with the shrimp if I were you.  We didn’t try the sushi, but if you were so inclined you could sit at the small sushi bar and watch him make your sushi, which always make me feel better about restaurants that serve sushi, and I read several positive comments about the sushi on Urbanspoon.  If you are in the area and you are craving some sort of Asian food, it’s worth a stop in. 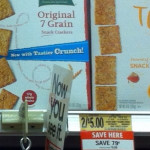