The FEED Co. Table and Tavern is a fabulous restaurant on Main Street in Downtown Chattanooga serving great Southern food and other classics created by Chef Charlie Loomis.

When it was announced a while back that Dustin Choate of Tremont Tavern fame, Miguel Morales, own er of 1885, and Charlie Loomis, 1885’s chef, would be joining forces to open a new restaurant, FEED Co. Table & Tavern, in the Craftworks building on Main Street, I got awfully excited. I was a fan of Chef Loomis’s cooking at the now long-since defunct Elemental, which Loomis left to take the helm at 1885 Grill. I adore 1885’s dressed-up Southern food and the amazing atmosphere and service there. And, of course, Tremont has won me over with their amazing burgers.

I was decidedly against the idea of having a burger today. There are several places that people have suggested that we needed to go to try burgers but y’all, Ima have to pace myself. I’ve eaten a lot of burgers over the last few months. They’re one of my faves, but I didn’t want to go to any of those suggested places. Not just yet.

I made a short list of places to check out and let Philip pick. He chose Feed Co. since we went to Clyde’s a couple of weeks ago (so I could get a picture of their burger) and saw people going in. We had actually kind of forgotten until then that they were open. We parked on the street (which is free if you can find a space). If you can’t find a spot on the street, there’s a Republic lot behind Clyde’s. For lunch, you enter on the Tavern side (the Table side doesn’t open until dinnertime).

The hosts told us that the wait would be 15-20 minutes and took our phone number to text us. We had barely walked down the sidewalk to get a few shots of the outside before they texted us, though. We were seated at a bar in front of the arcade games (really!) and our server, Brian, immediately greeted us and took our drink order. They have an extensive beer list and Philip ordered a Yazoo Sly Rye Porter. They also have lots of specialty cocktails…I entertained the idea of ordering a 50 Shades of Pimm’s martini (Pimm’s No. 1, muddled strawberries, orange mint, and cucumber, fresh lemon juice, and Pure Sodaworks strawberry jalapeño soda) but ultimately decided against it.

Brian suggested the Brussels sprouts & artichoke dip, served with fresh farm bread, which did indeed sound delicious. However, I of course noticed the fried pickled green beans. So did Philip. Fried pickles are fried pickles, you guys, regardless of whether the pickles are cucumbers or green beans. So of course we ordered them. All I can say is oh.em.gee. They were fantastic, briny and tart with a light tempura-like batter, served with ranch dressing for dipping.

My eye went straight to the fish & chips as I was deciding on what I would order for my meal. I briefly entertained the idea of ordering the sloppy Joe (grass-fed sloppy joe, yellow mustard, Niedlov’s bun) because how many restaurants serve sloppy Joes?!?!?!?! In the end, though, I went with my gut instinct: CBC beer-battered cod, house cut fries, house pickles, cole slaw, and malt vinegar tartar sauce. The batter on the fish was thick and just slightly bitter with the flavor of the beer, the fish just cooked through. The fries were ultra-skinny, skin-on, and perfectly seasoned. The slaw was a little creamy, a little vinegar-y, with cabbage, carrots, red onion, and Brussels sprouts, and the tartar sauce had the unmistakeable tang of malt vinegar with chopped pickles and a little whole grain mustard. Those house pickles were pretty on point too.

Philip decided to step out of his comfort zone and go with the hempnut burger with a quinoa & hempseed patty, pickled okra, basil mayo, lettuce, tomato, and onion. He ordered tater tots as his side (other options include the fries, buttermilk whipped potatoes, french green beans, cole slaw, and vegetable succotash). The burger had an unmistakeable grilled flavor and the texture was much more “burger-like” than you might have imagined. We weren’t really sure whether the pickled okra made it into the burger somehow…Philip said he didn’t taste or notice it. Not that it mattered…he really loved the burger. The only complaint that he had was that it was a tad crumbly, but the flavor made up for it. The tater tots were pretty standard.

The atmosphere at FEED Co. Table & Tavern is fantastic. The tavern side is completely laid-back and casual with a huge patio for outdoor dining and, as I mentioned, arcade games for killing a little time (or if you just need a Dr. Mario fix. I am not kidding. Angie, we gotta go!!!). The “table” side is a little more dressed up but still completely cozy. The menu is great-inventive but not off the deep end. I would expect no less of Chef Loomis. Our service was wonderful-Brian was very friendly, attentive, and professional. The FEED Co. Table & Tavern has definitely won our seal of approval. 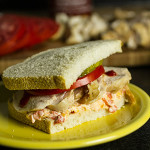 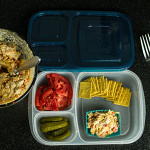