The Farmer’s Daughter, formerly located in River View near Downtown Chattanooga, is now closed. The Daily Ration, run by the owners of The Bitter Alibi, has moved in to take its place.

Seemingly ages ago (I think it was about 2 years in actuality), it was announced that Ann Keener, literally the farmer’s daughter (her parents farm at Sequatchie Cove) and her husband would be opening a restaurant at the former Exxon station at the corner of Hixson Pike and Tremont, across from the old Greenlife building and next door to Tremont Tavern.  It seemed to take forever, but this past October, the Farmer’s Daughter finally opened for business.  Much to my chagrin, their hours are 7-2 (which bugs me only because my opportunities to go anywhere during those hours are extremely limited).  Philip and I have been meaning to go since they opened, but every Saturday we seem to think about it at about 1:40, and I hate being the person that goes into any sort of establishment right before they close.  I think it comes from my days of working at Chuck E. Cheese’s as a teenager, when people would actually walk in the doors literally when the manager was locking the door for the night and they would inevitably stay for at least two hours (corporate policy prevented us from asking them to leave…but who keeps their kids out that late?!?!?! And I was a kid too, with homework to do and tests to pass!).

Anyway, I’m not here to vent about all those hours of lost teenage sleep.  Someone asked us last week if we’d been to The Farmer’s Daughter yet and we decided that we must purpose to go there this weekend.  So, we woke up super-early (6:40) in the morning on Saturday (actually, that wasn’t by choice, it just happened) and didn’t eat breakfast, which was really not a good decision because I was pretty much hollow by the time we got there at about 10:20.  The parking lot wasn’t super-crowded, and even though there was a short wait (as in about five minutes) for a table, the spacious atmosphere kept feelings of being cramped at bay.

Before I go any farther, let me mention that The Farmer’s Daughter is also home of Chattanooga’s newest coffee bar, Copacetic Coffee.  Copacetic is operated by my very, very favorite coffee purveyors, Velo Coffee Roasters.  They have a walk-up bar right when you walk in the door in case you want something to sip while you wait or if you just want to slip in for a coffee (and maybe some baked goods, too….there were butternut cinnamon rolls, muffins, and peanut butter cookies on the counter).  A limited menu of coffee drinks featuring Velo roasted coffee and Cruze Dairy Farm milk promises nothing but perfection, but unfortunately there was no decaf available.  Philip, sadly, can no longer have caffeine, and since I was not going to drink delicious Velo in front of him, we just had water.  Velo decaf, by the way, blows the others out of the water.

The menu at The Farmer’s Daughter is pretty tiny, which, if you have read my blog much, you know I find to actually be a strength in a restaurant.  The more items on the menu, the less time you have to focus on making sure that each item is perfect.  They feature almost exclusively locally-produced foods, including Link 41 bacon (more on this in a minute), other pork products as well as cheese from Sequatchie Cove Farm, grits from Riverview Farms, and Gregg’s Eggs.  Until 10:30, they serve breakfast, then at 10:30 they switch to brunch (on Saturday) or lunch during the week.  We got there at 10:20 so we were at that perfect nexus in time where we could order off of either menu, and while the breakfast quiche with kale, mushrooms, and cheese sounded stunning, we both ended up ordering off of the brunch menu.

Now, there was a pimento cheese sandwich (served with a choice of side) that naturally appealed to me, since pimento cheese is one of my obsessions.  I also briefly considered the power salad, which with quinoa, french lentils, roasted roots or pumpkin, marinated veggies, pumpkin and sunflower seeds, shaved parmesan, and lemon-miso dressing sounded amazing, I was in a breakfasty mood.  So….I turned my attention to deciding between grits and greens-a bowl of Riverview Farm grits with Cumberland cheese, topped with Crabtree Farm collards slow cooked with Link 41 cured bacon, and topped with a farm egg-or Mike’s potatoes-3 potato hashbrowns, served with housemade applesauce, organic sour cream, fried Sequatchie Cove ham, and an egg.  Haley, our server, told me that while the grits were great, the hash browns were pretty much fantastic and that would be her recommendation…so I got them.  She did not lie.  They were excellent, cooked to crispy perfection with just the right amount of salt and not too much grease.  The ham was wonderfully salty and delicious, and the egg was very nice too, though I was expecting (and hoping for) fried.  I loved the accompanying applesauce and sour cream, which made me feel like I was eating latkes.  The only thing that could have made this better is a biscuit!

Philip was a little bit upset by the lack of bacon on the menu.  If you’ll notice, I mentioned it above in the grits & greens, but that’s the only menu item featuring the Link 41 bacon.  An off-duty employee was dining at the table next to us and told him that it has a lot to do with the sheer volume of requests for Link 41 bacon that would inevitably come if it was a regular menu item.  We don’t want Link 41 to run out of bacon!  This meant that he had to settle (I say that sarcastically) for the breakfast sausage, which was a thick, well-cooked, perfectly seasoned patty alongside his blueberry cornmeal pancakes, which he had with house made vanilla syrup and sorghum plus a sunny-side up egg (for an extra charge).  The pancakes were deliciously light and fluffy, though for some reason only the top pancake in the stack of three had blueberries.  He wasn’t too put off by that since he really only ordered those over the regular buttermilk pancakes since they came with the sausage.  The vanilla syrup was good but he really loved the sorghum, though nothing could ever replace good old maple syrup.

Our bill was a little under $20 pre-tip….not a discount brunch but definitely not expensive considering the high-quality local food that we were served. Our server, Haley, was wonderful-attentive, friendly, and a little bit sarcastic in a good way (but only after we were a little sarcastic with her in jest)-we like that in a server. The atmosphere is bright, the decor beautiful because of its simplicity….and the food the same-beautiful because of its simplicity. We were impressed. 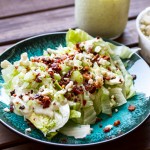 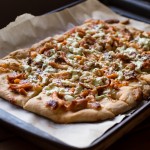