My summer squash soup with cheese is like a perfect squash casserole in a bowl – topped with cheddar cheese. It’s great with saltine crackers!

Several months ago Philip and I ate lunch at Vine Street Market, where I had a squash soup that contained crookneck and zucchini squash as well as cheddar. Amazingly, I had never thought too much of making a soup out of summer squash. I vowed to change that and come up with my own version of cheesy summer squash soup as soon as squash was in season. Hopefully with squashes from my own garden.

We grew a square foot garden for the second time ever this summer. The first time we did it (four years ago, I think) we had zucchini falling out of our ears but didn’t get one single crookneck (thanks, stinkbugs). This year we didn’t get a ton of either. My first attempt at this soup was made with an assortment of summer squashes that we picked up at Grocery Bar, but for the second (the one you see here) I actually had enough squash from my garden to make it. Winning!

I really had no idea where to start here. I did an internet search for “summer squash soup” and didn’t find much that really appealed to me. One day as I was flipping through my grandmother’s recipe book, I noticed her recipe for squash casserole, a Southern favorite made with yellow squash, Vidalia onions, bell pepper, and cheddar cheese, topped with crushed saltines. Hmmmm. I decided to make a soupefied version of squash casserole using yellow crooknecks as well as zucchini.

My first attempt at summer squash soup was pretty good, but there were a couple of things that I wanted to change for the final version. First, when I put the shredded cheese directly into the soup it stuck to the bottom of the pot. Big time. Solution: add the cheese to the bowls, not to the pot. Second, I wanted some cream. Because cream. Third, in my initial version I tried to be all fancy and tart the soup up with some pan-fried buttery croutons that kind of got lost in translation. Why was I being fancy with this? I pulled out a sleeve of saltines and declared them the winner of the accompaniment contest.

Squash season is almost over. My plants are starting to look a little sad. I think we’ll get a few more, but not many. I’m excited to have this recipe in my file for next summer, though….and honestly, while the flavor may be a little less exciting, I think this soup has enough other things going on that you could pull off a perfectly delicious soup with middle-of-winter grocery store squash. 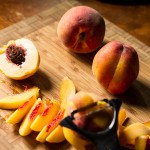 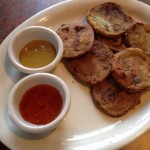