I have not shopped at Wal-mart since September 2008 (I’m not sure if I’ve ever said this here, but I’m a boycotter. I was already not feeling the place, then they made me really mad-long story-and I just haven’t been back). I purchased my boiling water canning kettle at Wal-mart. Sometime before the boycott. So…that gives you an idea of how long this mammoth has been sitting in the cabinet by my laundry room waiting to be used. I had the whole kit-n-caboodle….kettle, rack, canning kit (jar lifter, magnet for picking up lids, headspace measurer, funnel), lots of jars in varying sizes…but for some reason the idea of canning seemed so daunting that, despite the fact that I had purchased a couple of books on the subject, I haven’t been able to work up the nerve to actually can something. Which is bizarre, since I make my own cheese, bread, etc. Well, I’ve been purchasing copious amounts of strawberries from Tidwell Berry Farm from the stand that they’ve been setting up near my house, and since the window of time that these beautiful, delicious, and perfect berries is available is very small, I knew I was going to have to freeze time. Believe me, fresh, in-season, local berries are a world away from anything you buy in a plastic box at the grocery store.

I found a book called Put ‘Em Up at Books-a-Million a few weeks ago, and looking at it, I felt like it made food preservation (not just canning, but also freezing and oven-drying) a lot more accessible than any of the other books that I have read or purchased in the past. Then I found a book called jam it, pickle it, cure it at McKay..I had seen it at Greenlife sometime ago and decided to forego the purchase at the time, but it’s difficult to pass up the opportunity to purchase a book that tells you how to make bacon (!) on trade credit. This book also has some amazing recipes for food preservation and lots of things that you can make from scratch. Put ‘Em Up had a great recipe for strawberry jam, so here I go. My recipe, however, is an adaptation of the recipe in the book. I decided to reduce the amount of sugar and use honey in place of most of the sugar. I also used fresh lemon juice instead of the bottled lemon juice that the recipe calls for.

The night before my jam-making session, I washed and capped three quarts of strawberries. I put them in a large bowl and poured a cup of local honey over them, stirred them up, and covered them with plastic wrap. I left them on the counter overnight to coax the juices out of the berries (macerating). And I forgot to take a picture of the pre-macerated berries! That’s okay…these berries still looked beautiful the next day. Look at all that gorgeous juice!

Before starting the actual cooking process, I washed my half-pint jars, lids, canning rings, canning funnel, jar lifter, a pair of tongs, a ladle, and my kettle with hot, soapy water, then placed everything except for the lids in the kettle, covered it with water, and set it on the stovetop to boil. Once the boil started, I let it boil for ten minutes, then turned off the heat. After letting it sit for five minutes, I dropped in the lids (if you boil the lids, you will mess up the seal and all will be lost!). I let everything sit in the kettle until my jam was almost ready to be ladled into the jars.

Now…time for the jam. I poured the berries and all of the juice plus six tablespoons of lemon juice and the seeds and pod of a vanilla bean into my 8-quart stockpot and turned it to medium-high, stirring and mashing the mixture until it came to a boil. Once it began boiling, I let it go for about thirty minutes. I kept hoping that it would thicken up, even adding another half-cup of sugar, but it never really did. After it was finished boiling, I let it rest for five minutes.

About ten minutes before the jam was finished cooking, I used the jar lifter and the tongs to take everything out of the kettle and drained it on a clean kitchen towel. Once the jam was rested, I used the funnel and the ladle to divide the jam between the jars, filling them only to the bottom of the funnel (this allows room for the jar to pressurize during the canning process). At some point in this process I fished out the vanilla bean pod. I actually underestimated the number of jars that I would need, so I ended up with extra, which I put into unsterilized jars (the recipe states that refrigerated jam should keep for up to four months). The extra filled up 2 2/3 half-pint jars. I used the magnetic lid lifter to place the lids on the jars then screwed the lids on finger tight (you don’t have to twist them till you can’t twist anymore!).

Now, I placed the jars into the rack in the boiling-water-canner, making sure that they were not touching each other or the bottom of the kettle. I poured in more water until the jars were covered by a couple of inches and brought the water to a boil. I allowed the water to remain at a rolling boil for ten minutes, then turned off the heat and left the jars in the water for another five minutes, at which point I used the jar lifter to remove the jars from the water. I placed them on a towel to avoid thermal shock. Almost immediately the jars began “popping”, which is when the pressure causes the lids to “suck” in. If any of the jars do not pop, you should place these jars into the fridge and use them within four months. All of my jars popped, so these will go in the pantry to be used up long after strawberry season has passed.

We ate some of the jam from one of the “extra” jars on biscuits this morning. It was definitely not thick like the strawberry jam you are accustomed to from the grocery store. Strawberries are a low-pectin fruit, so in order to get a thick jam you will need to add pectin (you can buy it from the canning section at the grocery/hardware store) or use a recipe that uses a lot more sugar than this one does, which will help it to get a better gel. This jam, which had about 3/5 of the sugar called for in the recipe, is fairly thin and more like a strawberry syrup like you might use on ice cream. I’m actually okay with that; it seems a bit more authentic and “strawberryish” to me. I need to think of a better name than jam(ish) so if anyone has any suggestions, please let me know! This really was amazingly delicious, full of amazing strawberry flavor and extremely sweet, so I can’t imagine using any more sugar (one recipe I found called for nine cups of sugar for the same amount of berries I used-I used 1 1/2 cups of honey/sugar!). This is perfect spread on biscuits and I’m sure would be just as amazing on toast….but would also be perfect on ice cream or stirred into yogurt. Or you could strain the syrup from the berries and use the berries on a PB & J and add the syrup to club soda or milk for a sweet beverage. The possibilities are endless!

On a semi-related note…..check out my blueberries!  They’re in my front yard, and I can’t wait to pick them!

Powered by GetMeCooking
Want recipes from scratch & restaurant reviews in your inbox weekly? 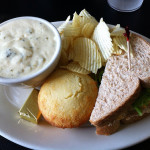