Next week Philip and I will celebrate our ten-year wedding anniversary (!), and to really do it up right, we decided that this year we should go on a real vacation, a planned ahead, all stops pulled vacation, rather than the long weekend trips that we’ve done the last couple of years.  After some pricing and contemplation, we decided on Walt Disney World-a curious choice, no doubt, for a couple with no children.  We got a fantastic package, including our hotel, dining plan, and park passes, for a great price, much better than flights/hotels/cars to any of the other destinations we considered….and that would be before food, activities, and shopping (we knew that besides some ears for the nephews, there wouldn’t be much need for souvenir shopping at WDW).

We had a great time, and I have to say that my favorite park was Epcot.  Not only was it the only park we visited more than once, we went three times.  I just loved the World Showcase, the opportunity to experience just a little of another culture for a moment.  On the night before we left, we had dinner at the Rose and Crown Dining Room and Pub, where our server from Donegal, Ireland encouraged us to try the sticky toffee pudding for dessert.  Now, I had perused their menu before we went, and that was, in fact, the dessert that was speaking to me.  Regrettably, Philip chose something else, something forgettable….but the sticky toffee pudding is, well, stuck in my memory.  Secretly, I wish I was British (and actually, I can trace pretty much my entire lineage back to the British Isles, so I guess in a way I am!).

When we returned home, I decided that I was going to make sticky toffee pudding for dessert for our monthly Sunday afternoon lunch with Philip’s family.  Surprisingly, internet search engines didn’t yield many promising results, so I checked out Tasty Kitchen, a recipe community on thepioneerwoman.com.  There I found this recipe by Dishin and Dishes, and it looked right.  Plus, it was individually portioned, which is always a plus!  Sold.  I made it, and the rest is history.  Sticky toffee pudding is the best dessert on earth.  Make it.  Today.

First, save some coffee from your breakfast, or you’ll have to do what I did and make it on the fly using instant espresso crystals.  I was not happy with myself.  You’ll need a tablespoon.  An hour or so before you start, set out five tablespoons of butter to soften.  When you’re ready to get started, preheat the oven to 350 degrees.  Spray a muffin pan with nonstick spray.

Put one tablespoon of strong coffee (see above note!), 1/4 teaspoon of vanilla, 1/2 teaspoon of baking soda, and four ounces of coarsely chopped dates into your food processor.  Yes, dates.  Don’t leave me now!  Have you ever had a date?  It’s not a prune.  I don’t think I’d ever actually tasted one, and wasn’t even positive where to find them (the dried fruit section, by the way).  They aren’t bad!  They taste like giant raisins.

Clamp on the lid and start it spinning.  While it’s going, pour 3/4 cup of hot water into the chute.  When you are finished, you will have a very wet, sticky, and foamy mixture.  It’s going to have some chunks in it.  That’s okay.

Now, using an electric mixer, cream the softened butter and 2/3 cup of sugar until they are light and fluffy, then beat in two eggs, one at a time, mixing thoroughly after each addition.

Next, add 3/4 cup of flour, 1 teaspoon of baking powder (my baking soda picture is so dark!  I forgot to take one with the flash), and 1/8 teaspoon of salt.  Once all of those things have fully incorporated, pour in the date mixture from the food processor and blend.  Portion into the muffin tin and bake for 12-15 minutes, or until the centers are fairly firm.  Remember that these are called sticky toffee pudding for a reason, though!  They are very sticky.  Let them cool for a while, then carefully remove them from the pan.  I had a couple of casualties.  That’s okay-we saved those for ourselves!

Now for the sauce, or the toffee part.  I made the whole recipe, so that’s what I am going to go through here, but seriously, you could half this and have more than enough for 12 cakes.  We ended up making a batch of brownies to pour the toffee sauce over.  That’s dedication to not wasting ingredients, my friends.

Melt two sticks of butter over medium heat, then stir in 1 1/2 cup of brown sugar and cook until foamy.  Add 3/4 cup of heavy cream and stir until slightly thickened (it will be pretty runny when hot, but when you chill it gets very thick).  At this point, you can serve your dessert by pouring the sauce over the cakes, or refrigerate the sauce and reheat when ready to use, which is what I did. 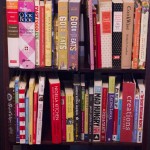 Why I Cook (Neuroticism Demystified)