Pasta pie, a la Silver Spoons or The American Café, is an easy and SO tasty way to use up the vegetables in your fridge for a great simple dinner!

I’m going to let you all in on a secret (and I may be shooting myself in the foot here): the best time to grocery shop is Friday night.

The problem with grocery shopping is always-ALWAYS-meal planning. I am an obsessive grocery list maker…for the first few months that Philip and I were married I’d just do like my mom has always done and go to the store and pick up whatever struck my fancy. It didn’t take me long to figure out that while that might work for her (though she does tend to complain about spending x number of dollars on groceries and having nothing to eat) it didn’t work for me, so I started meal planning.

For at least the first five years we were married, every time I asked Philip what he wanted to eat he would say (in complete seriousness, too), “Spaghetti.” Every. Blasted. Time. It finally got to the point that I would say, “What do you want to eat this week? Don’t say spaghetti!” While I am still the “chief meal planner” I’m pretty sure I’ve sighed and rolled my eyes enough to get my point across and Philip usually suggests one or two non-spaghetti meals each week. As I was planning the list a couple of weeks ago, his suggestion was “some sort of pasta dish” so I had to use my professional questioning techniques (in my case, these are techniques that teachers use to help children develop their language and communication skills) to get him to expand on his suggestion. Finally we arrived at a pasta-based casserole containing spinach and artichokes. Good enough for me.

Then it dawned on me: pasta. pie. When I was in high school there was a restaurant at Hamilton Place called Silver Spoons, which later became Mozzarella’s, which later became The American Café. I think they were all actually the same restaurant, owned by the same company, with changes made to the name and maybe minor changes to the menu. There were two things, though, that they didn’t change: (1) peanut butter pie; and (2) pasta pie.

I don’t think that I ever actually ordered either of the above items, but several years back I purchased the cookbook How to Boil Water, which was a Food Network publication loosely based on their Tyler Florence show with the same name, meant to teach timid cooks kitchen basics. I loved the book-still do. It’s a great book with some great basic recipes, and one of my favorites was a pasta pie recipe that included several types of cheese, broccoli, sundried tomatoes, and penne. Besides cheese, this recipe contains none of those things…but because it’s baked in a pie plate, it’s pasta pie. While spinach and artichokes are obviously a classic combination, you could really use any vegetables here, though.

This pasta pie is a great, easy recipe and makes fantastic leftovers! 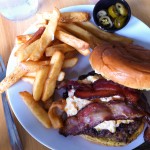 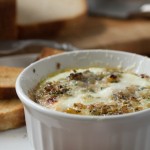