This homemade eggnog is easy and only includes six ingredients, so you’ll know exactly what you’re drinking this holiday season.

Beverages can be polarizing, no?  If you remember the cola wars of the Eighties, you know what I’m talking about. I mean, not even Billy Joel could take it any more. It really was the biggest issue of the decade. Coffee is another. You either ARE a coffee drinker, or you aren’t. Or you throw back Diet Coke and would never consider drinking regular, or vice versa (I happen to be a full-sugar kind of girl, though I prefer Blue Sky or, better yet, Pure Sodaworks these days). Wine? Love it or hate it. Beer? You’re a beer drinker or you think it tastes like….well, never mind. Even water can fall into the trap. While, besides my morning coffee, it’s pretty much the only thing I drink (on a daily basis, anyway), I know people who never let a drop of plain, unadulterated water pass their lips (too boring, they say). However, one cannot argue that water is, well, the basis of matter, pretty much.

Then there’s eggnog. I have found that eggnog evokes one of two reactions: “Oh, I LOVE eggnog!” OR “I HATE eggnog! (followed by gagging noises, crumpled faces, etc.)” I happen to fall in the former camp. I was raised on Mayfield eggnog, which appeared in the grocery store in late October or early November. My dad and I drank the stuff like water and somehow managed to escape the holiday season without resembling Violet Beauregarde after she turns into a giant blueberry and has to be rolled out of Willy Wonka’s factory.

Thank goodness I married someone who shares my feelings about eggnog (perhaps his shared affection was part of our connection, although we’d been dating for nine months when eggnog first entered our relationship, so probably not). We wait as long as we can possibly force ourselves too, because once it’s on….IT’S ON. My mother-in-law serves eggnog at Thanksgiving and Christmas dinners in glasses so small I can’t imagine what they were actually intended for (juice, I’m assuming, but I can’t be sure) which makes me and Philip laugh because we chug our eggnog from 12-ounce tumblers that sometimes we only fill 3/4 of the way, you know, when we’re feeling virtuous.

I was so happy when I found the inspiration for this homemade eggnog recipe on Carrie Vitt’s wonderful website, Deliciously Organic. As delicious as the storebought stuff is, even the organic varieties contain stabilizers and are pasteurized to death to extend the shelf life (and really, there’s no need for an extended shelf life when you’re going to drain the eggnog in a couple of days anyway, you know, drinking it from our tumblers and all). I couldn’t even find ingredient lists for any regular store brands online. Hmmmm. Carrie’s recipe has five ingredients: whole milk, eggs, vanilla (yes, I make my own. It’s easy.), maple syrup, and nutmeg.

I’ve changed my recipe up a bit, using regular sugar instead of maple syrup, mainly for the flavor factor (the maple syrup does tend to dominate the flavor a little bit). You could totally use maple syrup or even palm sugar here, though. Unlike many homemade eggnog recipes, it’s cooked, so the integrity of your eggs is not quite as crucial as it may be otherwise (but I do try to buy the best eggs I can anyway). The most difficult part is waiting for it to heat to 160 degrees and stirring frequently. Well, really, the waiting is the hardest part (thanks, Tom Petty) because you have to let it chill for several hours before drinking it. But when the wait is over, you’ll declare it totally worth it.

This recipe is adapted from Deliciously Organic by Carrie Vitt.

This takes a long time to cook because you want to heat it gradually to make sure you don't scramble the eggs. However, you don't have to stir it every second, so you can get other things done while it cooks. 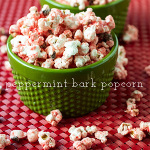 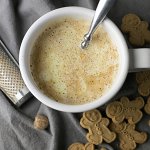 Eggnog Latte without a Milk Frother