How many of you are singing the Chicago song with me now? If you don’t know that song, you are obviously younger than me and let’s never speak of that again.  Anyway, it was the twentieth of July, not the Fourth, but close enough.

You may have guessed based on the establishments about which I am writing that the park to which I am referring is Coolidge Park. I had an appointment scheduled yesterday afternoon to do a photo shoot, so when Philip saw on Facebook that the Muenster Truck was going to be at Chattanooga Brewing Company, it seemed logical to both of us to head down for some grilled cheese action.

You may have walked past Chattanooga Brewing Company many times without really even realizing that it was there. Located next door to N2 Shoes, Chattanooga Brewing Co. is only open to the public on Fridays from 5-9 p.m. and typically on Saturdays from 1-9 p.m.(well, these are the stated hours on the front page of their website, though I did notice that their event calendar on the website mentions growler hours starting on Sundays at 3 p.m.), though they opened early yesterday to accommodate grilled cheese eaters. The company originally opened in 1890 (later closing in 1915) and was reopened in 2010, microbrewing a variety of brews right their in their tiny space. Their Imperial Pilsner and Hill City IPA are available year-round and other brews rotate. During their “growler hours” (listed above) you can purchase their fantastic small-batch beers by the glass (or smaller samplers of the whole variety) or in growlers (64 oz.).  Chattanooga Brewing Company beers are served in many local establishments-check out the list hanging in their window to find out which ones (I wish I’d taken a photo of it)! Pictured below is their Hill City IPA.

When I first heard of the food truck trend, one of the trucks that really piqued my interest was a Los Angeles truck known simply as The Grilled Cheese Truck, serving plain old grilled cheese sandwiches as well as more unusual offerings like a macaroni & cheese and short rib sandwich. Truth be told (and I may have mentioned this here) I once wanted to open a grilled cheese truck in Chattanooga, but I’m definitely not cut out to be a food truck owner so I’m glad someone else undertook the task.

I was super-excited when I heard a few months ago that Chattanooga was soon to get a grilled cheese truck….and apparently so were a ton of other people because when I went to the Chattanooga Market the Sunday before Independence Day the Muenster Truck was by far the most crowded. The line was a mile long and I was hot and hungry so even though I really wanted a grilled cheese, I was not going to stand in that line (regular readers know that I’d rather gouge my eyes than wait in a superlong line or wait for an hour and a half to be seated in a restaurant). Guru, the Muenster Truck owner, emailed me recently and told me that Center Park tends to be a little less crowded than the market, so my plan was to head down there in the next week or two, but this was the perfect opportunity.

I came extremely close to ordering the Angry Bacons sandwich, which contains two of my favorite things: bacon and avocado (in the form of guacamole) but in the end the smoked gouda of the Dragon Ball Cheese won out. Besides, you can’t go wrong with caramelized onions and sautéed mushrooms.  Philip decided on the Rocket Italian, with provolone, a spring mix, Italian vinaigrette, and tomatoes.  Honestly….any of these sounded delicious, because who doesn’t love a grilled cheese (and coincidentally, I’m going to be sharing some grilled cheese recipes with you guys fairly soon)?  When Raj, whom I gathered is the manager of the truck, handed us our sandwiches, the first thing that struck me was the smell.  It smelled like a grilled cheese.  That may sound strange to some of you, but you dyed-in-the-wool grilled cheese lovers (like myself) will know what I’m talking about.  Some food purveyors try to be fancy or modern or “healthy” with their grilled cheese/paninis, brushing or spraying them with olive oil instead of cooking them in butter.  This was a true butter-grilled sandwich.  Heaven help me.

Raj promised that these sandwiches would fill us up, and let me tell you….he wasn’t lying. The sandwiches were very large and assembled on sturdy but not dense white bread. For you health nuts out there, get over it. As much as I’d love to love a grilled cheese on whole wheat-and do make them myself sometimes-I cannot deny that a proper grilled cheese must be made on white bread…it just turns up the comfort food level a couple of notches. There was a good ratio of cheese to toppings, which can be difficult to achieve. The mushrooms and onions on my sandwich were sautéed very well-to the point that they still had some texture but didn’t give that off-putting crunch of pseudo-caramelized onions that haven’t really been caramelized at all. I was only able to eat about 3/4 of my sandwich.

Like my sandwich, Philip’s had a nice ratio of toppings-including tomato, radicchio, and some more delicate greens-to cheese. This is a great sandwich for someone who likes a little crunch on their grilled cheese, but honestly, my favorite feature of the sandwich was the Italian vinaigrette. I have never thought of putting a vinaigrette on a grilled cheese, but I think it provided a perfect balance between the vegetables and the cheese. Delicious.

At $17 (including 2 bags of Miss Vickie’s chips and 2 bottled waters, of course this is a little more expensive than making a grilled cheese at home, but how many of you have all of the aforementioned ingredients to add to your grilled cheese? You should definitely support the Muenster Truck. To find out their hours and locations, you can check out their website: http://themuenstertruckchattanooga.com/www, like them on Facebook and/or follow them on Twitter.

After our lunch (which we ate on a barrel inside Chattanooga Brewing Company) we still had a quite a bit of time to kill before my photo appointment. This provided the perfect opportunity to get a little leisurely exercise by walking across the bridge. We circled Bluff View Art District and then ended up back at the bridge with time to kill, so Philip suggested a stop-in at The Ice Cream Show.

The concept at The Ice Cream Show is seemingly simple-you choose your based (soft serve chocolate or vanilla ice cream or yogurt) and your container (waffle cone or cup) then add mix-ins to your liking (they have a sign with suggestions, which I photographed, but my photo was way blurry. Unfortunately (if you’re indecisive like me anyway), the list of mix-ins was pretty long and it took me a minute…but then I saw green mint and all was right with the world. The cashier suggested one of their combinations-green mint, dark chocolate, and Oreos. It sounded pretty good to me, except the Oreos were unnecessary. Green mint & dark chocolate in vanilla ice cream. Yes. Pretty tasty, though I could only eat about half of it (that was a pretty large container of ice cream!). The green mint chips and dark chocolate chips lent the perfect amount of flavor to the vanilla ice cream. Mmmmm. Philip decided on a chocolate malt, which is pretty much his standard ice cream shop order unless he’s just in the mood for a waffle cone. The malt had a good texture, unlike the malts served at some shops that are not well-mixed and have chunks of malt powder throughout, but the malt flavor was not as strong as he would have liked (note-if you like a strong, bitter malt flavor….ask for extra malt!). Still a pretty decent malt, though-definitely better than many he has had.

Normally $13.75 might seem a little steep to me for ice cream, but when you’re sweating bullets in ninety-degree heat on a July day, it seems perfectly reasonable. The Ice Cream Show is definitely conveniently located at the south end of Walnut Street Bridge and I have no doubt that they do a ton of business in the warm weather months. It’s not Nana’s (because in my opinion no one will ever top Nana’s), but it’ll do. The staff was friendly and the service was quick, and they have a good selection and a nice atmosphere for patrons to cool down from the summer heat. 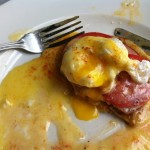