Roy’s Grill was an institution on Chickamauga Avenue, having been around since 1934 (with a few breaks along the way). Sadly, they closed just a few weeks after I published this post.

For many years, we really never went to Rossville Boulevard or beyond. There just wasn’t much to see there, as far as we were concerned. No dresses to be bought at the (now defunct) LaDean Shop or plasma to be donated at CSL. That area of town might as well have not existed; it never even entered our minds.

Then came Beverage World. I have no idea how long Beverage World has existed next to Big Lots in Fort Oglethorpe, but we’ve been going there for the last 3 years on Philip’s quest to try as many types of craft beer as possible. As we’ve driven down Rossville Boulevard so many times over the last few years, we’ve noticed Roy’s Grill, the cute little old-school diner right past where Rossville Blvd turns into Chickamauga Avenue, just over the state line, many times. Of course, it’s usually not open when we drive by.

Last week, Philip wanted to check for a specific beer at Beverage World, so we decided to try out Roy’s Grill. We arrived at around 11:45 on a Wednesday afternoon, parking in the lot for Roy’s Grill customers behind the restaurant. As we walked up, we could smell the tell-tale scent of burgers searing on a flat-top griddle, always a good sign. We entered through the back door, into the dining room, and were greeted by Anita, who told us we could sit anywhere we wanted, including downstairs at the bar. We decided to go for the bar.

Once we chose a couple of bar stools (we were the only folks down there at the moment), we were greeted by Anna Sue, who took our drink order. Philip ordered a chocolate malt ($3.75) and she quickly set to making that for him, right in front of us at the counter using a classic milkshake mixer. The malts and milkshakes are served in a footed glass with the mixing cup alongside it…plus two straws in case I wanted to drink some. I have to say, Anna Sue makes a pretty impressive malt. Chocolatey and bitter with malt, just the way we like it.

I had heard great things about the burgers at Roy’s Grill so I knew that I had to give one a try. Since I didn’t need a half-pound of meat on a super-sized bun (i.e. the Super Burger), I decided to go with the junior burger, a 1/4-pound patty on a soft bun with lettuce, tomato, onion, mayo, and mustard ($4.75). I omitted the onion, of course, and added cheese ($.70) and bacon ($1.80). The burgers are served with house-made chips, or you can get crinkle cut fries or onion rings. I went with the chips, because you all know I love homemade chips, but saw another customer with some fantastic looking onion rings and decided I would try those next time.

The burger was the perfect size for my appetite, and it was topped perfectly. The condiments and vegetables were portioned well so they didn’t overwhelm the burger or make it difficult to eat. The cook on the burger was perfect – a nice crust on the outside but still tender and juicy on the inside – and the American cheese was lightly melted but not gooey. The chips were perfect – thinly cut, crispy brown, and perfectly seasoned. This was a fantastic, classic burger meal.

Philip contemplated getting the Reuben, but ultimately decided to go with the meatloaf special, which Anna Sue enthusiastically encouraged. I wish I had thought to take a picture of the menu board with the vegetable specials listed, but I didn’t think about it. The special comes with two or three vegetables, your choice. Philip decided to go with the white beans, mashed potatoes and gravy (made from scratch), and fried okra (hand breaded) ($10.45).

This was definitely a generous portion of food. The meatloaf was a little chunky with onions and green peppers, but not overly so, with a thick layer of ketchup on top (I prefer ketchup-topped meatloaf to tomato sauce or gravy-topped meatloaf). It was well-cooked – cooked through but still tender, not tough or overcooked. I didn’t try the white beans (I don’t eat them…a little too mushy for me), but Philip said they were very tasty. The mashed potatoes were creamy and kind of “mid-thick” – not stiff but not runny – with a nicely seasoned brown gravy. The fried okra was some of the best we’ve had in a restaurant. The breading was more of a batter, perfectly seasoned with what I thought was sort of a buttermilk flavor, and the okra is deep-fried to a perfect crisp. The meal was served with a square of cornbread, which is Southern-style (i.e. not sweet), soft but not too crumbly.

The thing that impressed me most about Roy’s Grill was the employees. Anna Sue (on the left) and April chatted with us and every other customer without being intrusive. They were so friendly and enthusiastic. As each customer came in, they were quickly greeted. Many were obviously regulars, as one of the ladies would hand them a drink without even needing to ask what they’d be having. The atmosphere at Roy’s Grill like a homey throwback to a different era. The prices were good too. Pre-tip, our total was $22.95 for a whole lot of food PLUS a malt.

Roy’s had been around since 1934 (though they were closed for several years during that time). When you walked in the door, you felt like you’d been transported back in time – in the best way. Sadly, in August of 2016, Roy’s Grill announced that they would be closing due to financial difficulties.

We would have loved to return to Roy’s Grill for some of their great food and atmosphere! 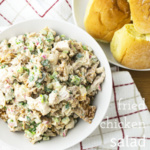 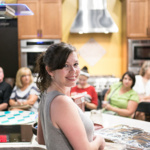 A Night Out With Chattavore at AllSouth