In my recent post about Tubby’s Real Burgers, I mentioned that I worked at a store named Monkey Business while in college…that’s how I discovered Tubby’s.  Another eatery that I learned about while I worked at the Monkey was River Street Deli, which was right under our store.  My boss’s husband was the manager, and he and the owner, Bruce, were “real” New Yorkers who started a real New York deli right here in little old Chattanooga.  I was too young and stupid about food to know that I should eat there.  My main experience was with the free drinks that we got from there every day…but I do recall trying a fantastic dessert called “Snicker bread pudding” (think chocolatey, cakey, caramelly, yummy…..), and I also recall that RSD is the first place where I ever tried a turkey sandwich with cranberry sauce, and, if I remember correctly, cream cheese.
Back in 1999, it sounded like an odd combo….but now it’s one of my favorites.
Fast-forward a few years….I definitely wouldn’t call myself a regular, because I don’t exactly frequent a lot of downtown establishments (due to my whole working 2 miles from my house and all)….but now I know a whole lot more about what constitutes a good deli, and, my friends, Subway ain’t it (not that I never eat Subway).  RSD, though, has a great menu, with daily specials and all the classics you’d expect to find on any good deli menu.
A few months back one of my friends posted a pictures on Facebook of a fantastic-looking brisket sandwich and a bowl of cream of spinach soup.  I asked her about it, and she told me that it was a River Street special served on Thursday.  So, last Thursday, I suggested to Philip that we jaunt on down there and try it out.
The brisket sandwich is described as “Brooklyn-style, with slaw and Russian dressing on a Kaiser roll.”  Both of us were practically salivating by the time we got there at 12:30ish, trying to avoid the heavy part of the downtown lunch crowd.  Dumb move, it turns out, because they were already sold out of brisket.  Frowny face!  Bruce offered me a sandwich made in the same style as the brisket sandwich but with their fabulous rare roast beef, and I happily accepted.  I also ordered a “mini soup”, because I love spinach soup.  Philip decided to try the Tuscan turkey panini, described as “regional flavors and tastes of Italy grilled to perfection on homemade focaccia bread”.  He also ordered a mini soup.  We both ordered waters; drinks are self-serve.  Our food came out within 10 minutes.
While I was disappointed that I didn’t get to try the brisket-and will definitely have to make a trip back on a Thursday (super-early!)-I was very happy with my meal.  Let me tell you, this was a 5-napkin sandwich.  It was sufficiently drippy with the homemade Russian dressing (which, in case you didn’t know, is similar to a non-chunky Thousand Island, made with mayo and ketchup), and I love, love, love their roast beef (their roast beef sandwich is made with Boursin cheese and is to die for).  The soup was even better, and I have to try to figure out how to make it at home.  It did not contain cheese, but was buttery and creamy with the perfect amount of spinach-enough to taste, but no so much as to make the soup stringy.  It was served with a few very crunchy pieces of baguette to float in the soup.  I ate all of the soup and about 2/3 of the sandwich.  I probably could have finished the sandwich, but I probably would have needed to be carried out on a stretcher.

Philip said something in regard to his panini that I found very surprising.  I am fairly certain that I have mentioned it before, but Philip loves brisket.  LOVES it.  On this day, however, he actually said he was glad that they didn’t have the brisket because he loved his panini so much.  Normally, he likes paninis, but finds them to be a little bit greasy due to the oil or butter that they are usually coated with before being pressed.  He said that this one was not greasy and did not seem to have any fat added to the outside, which he found to be a definite plus.   The sandwich had thick slices of turkey and grilled vegetables (red pepper, onion, zucchini).  I should have taken notes, because Philip couldn’t remember if it had cheese or not; if it did, it didn’t make much of an impression on him-but the sandwich itself definitely did.

Before we left, I introduced myself to Bruce and let him know I would be posting a blog about River Street Deli soon.  He told me that they make everything from scratch-a definite plus in my book-and that next time I come on a Thursday I should come early, as the brisket sells out quickly.  He also told me about a sandwich with roast beef and garlic aioli he had been experimenting with.  Sounds like a winner to me!  If you are looking for something fairly quick and absolutely delicious for lunch (or an early dinner) on the North Shore, definitely check out River Street Deli! 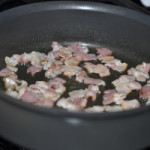 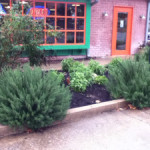