Ricko’s Pizzeria is a pizza restaurant in Lakesite, Tennessee (Soddy-Daisy/Hixson) that serves pizza, pasta, & sandwiches & has quickly made a name for itself!

Usually, when I write about a restaurant, it’s the first time I’ve been in. That’s not the case with Ricko’s Pizzeria and Italian Cuisine, though. Ricko’s Pizzeria opened back in March and, since it’s just a couple of miles from my house, we’ve eaten there several times since they opened. I’ve mentioned plenty of times that I like to give new restaurants some time to get their flow before I write about them, though, so we decided to wait.

Ricko’s is in a spot that has been a handful of other restaurants in the 15 years that we’ve lived in this part of town, most recently occupied by Ron’s Pig Out, a barbecue restaurant. The interior is pretty basic. You order at the counter and they call your number out when it’s ready. If you’ve ever dined at a Rafael’s in the area, the menu will be familiar to you – it’s very similar to the menu at Rafael’s, right down to the buy-one-get-one-free pizzas (excluding the personal pan pizzas). It is my understanding that the family that owns it was previously connected to a Rafael’s restaurant…not sure how.

Anyway, we placed our order immediately when we walked in and our food was out in about ten minutes. Philip wanted to try the garlic knots, so we got an order of those. The garlic knots were a little crusty on the outside, soft on the inside. I prefer them just a little bit softer on the outside than these were, and would have liked for them to have a little more garlic. Still pretty good, though. They were served with a basic marinara sauce for dipping.

On this visit I decided to have the Italian cheese steak with mushrooms for $6.45. Sandwiches are served with fries and a pickle spear. The Italian cheese steak is tender sliced steak with melted provolone on a crusty Italian roll. You can order it with peppers and onions or with mushrooms (I am sure they would do both, but I haven’t asked). I am pretty sure there is a little mayonnaise under the steak. I really like this sandwich. It’s flipping huge (I ate half that night and the other half for lunch a couple of days later) and very flavorful. The only complaint that I have is that I am fairly certain the mushrooms are canned, and I am just not down with canned mushrooms. They are not a deal-breaker, though. The fries are basic frozen fries – pretty good but not anything that sets them apart.

Philip was in the mood for a pizza so he went with the personal pan pizza with pepperoni and mushrooms ($5.25 for a two-topping pizza). The pizza here has always been good when we’ve ordered it. The crust is not too thick or too thin and they don’t over-sauce it (something that drives me crazy). Again, canned mushrooms…but not a deal-breaker. We definitely choose Ricko’s over the national chain that’s just a little further down the street. It’s very convenient to call it in and have Philip stop on his way home from work.

Ricko’s Pizzeria is a welcome addition to the Lakesite/Middle Valley area. They serve sandwiches, salads, pasta, and other entrees in addition to pizza, and the staff is always very friendly. We’ve never had a long wait here, even on days that they are busy (which they often are). It’s nothing fancy, but it’s good. Judging by the number of cars we usually see in the parking lot at dinner time and after church on Sundays, I think that Ricko’s Pizzeria will be around for a while. 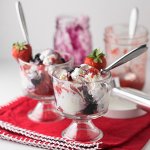 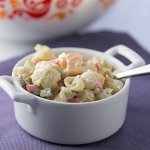