Save this recipe for later!

No. Quick Southern green beans is not an oxymoron. You can indeed make green beans that are tender, with the flavor of bacon (or ham, if that’s more your thing) and perfectly seasoned in just a little more than thirty minutes.  I am not joking.
I’ve lived in Tennessee my entire life.  Every potluck, every church dinner, every holiday, and, yes, every post-funeral meal, involves slow-cooked Southern-style green beans.  Sometimes there is onion, or, like my grandmother used to do, there might be peeled new potatoes.  But always, always, there is ham hock involved.  And lots of simmering.  Those are the magic ingredients, and until maybe about a year ago I thought that if you took away either of those ingredients, well, you could not have true Southern green beans. Thankfully I was incorrect.

I have no idea the origin of this recipe or honestly even if my recipe is anything like the original, but my mom made something like this a while back and a month or two later I started making this on a regular basis, using my memory of what she told me was in the green beans she made.  The bacon and onion take 5-10 minutes, then simmering the green beans takes about twenty minutes, and another 5-10 minutes to reduce the liquid.  I like to add a brown sugar glaze, but if you don’t want to do that, well, don’t (though I encourage you to try it at least once.  It’s amazing.).

Shared on The Weekend Potluck on Served Up With Love! 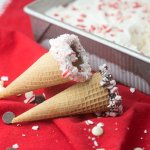 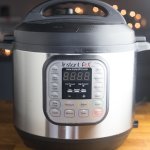 Getting to Know Your Instant Pot + Video