What better way to use up your leftover BBQ pork and coleslaw than to roll them in an egg roll wrapper and turn them into BBQ pulled pork egg rolls?

Pulled pork egg rolls originated from a Chinese food kick that I have been in lately. For the past month or two I have been all about General Tso’s chicken (try that recipe-it’s fantastic), egg rolls, fried rice (and no, I’m not pregnant). Enough to eat at a Chinese restaurant that I tried years ago and didn’t like. Attempt #2 yielded similar results. The chicken and rice were edible but the egg roll, not so much. I scraped out the filling and ate the wrapper.

It was sad, too, y’all, because I love a good egg roll. The thing about egg rolls is that you can put anything in an egg roll and it’s gonna be good. Case in point, these Reuben egg rolls that I made for our Saturday night snack supper this past weekend…they pretty much ruled. But I’m getting off-topic here. The thing is, I used to think that egg rolls required some sort of special skills, till we ate dinner at some friends’ house and they made homemade vegetarian egg rolls. Whoa. Egg roll wrappers, slaw mix, and some soy sauce and other stuff. It was eye-opening. When I made them at home, I realized that it wasn’t all fun and games, though…rolling an egg roll can be a little tricky, but don’t worry. I’ll show you how.

I had been wanting to make some smoked pork for a casserole idea I’d had (coming Wednesday!) and as I was trying to think of what else I could do with the pulled pork I remembered the egg roll wrappers I had in the fridge from where I made the aforementioned General Tso’s chicken and forgot that I’d planned to make egg rolls too. I was making coleslaw to go with the pulled pork, and suddenly it dawned on me: pulled pork egg rolls. Pulled pork, barbecue sauce, and a little bit of slaw. YAAAASSSSS. The best part? Well, never mind, I already mentioned pulled pork. But another plus? They’re baked, not fried. If you all haven’t noticed, I love oven-frying…it’s my favorite.

Anyway, smoke a pork shoulder or throw one in your Crock-Pot or pick some pulled pork up from your favorite barbecue joint and make these pulled pork egg rolls! You won’t regret it, I promise. 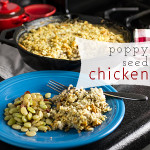 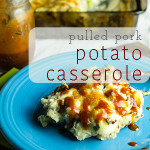