Puleo’s Grille is a small, regional chain (5 restaurants) based in Knoxville, TN. Their newest location is located in Ooltewah, TN.

A few months ago, Philip came home from his job at Sigler’s Craft Beer & Cigars and handed me a business card. The card was from a guy who worked at Puleo’s Grille who had come into Sigler’s looking for advice about what craft beers to include on their beer list the new location they were getting ready to open off of Exit 11 in Ooltewah. Philip had mentioned that his wife was a food blogger and the guy gave him his card.

Honestly, I thought up to that point that Puleo’s Grille was a large chain. I ate there once in Knoxville several years ago and didn’t realize that it was a very small, regional chain. The Chattanooga location is only their fifth location. They opened at the beginning of the summer, but we generally try to give places a few months to hit their stride before we go in. This past weekend, we decided that we’d given Puleo’s Grille long enough and headed to check it out.

We arrived at Puleo’s Grille around 4 p.m. on Saturday, so it was between the lunch and dinner rush and we were seated immediately. It took a few minutes for our server, Victoria, to check in with us, but I got the impression that they were having a quick server meeting in the back, as all the servers seemed to come into the dining area at once.

The fish was not your typical beer battered fish that you would expect with fish and chips. The coating was more of a light breading with the slightly pebbly texture of cornmeal. The inside of the fish was very tender and moist, and the garlicky dill caper remoulade was a nice complement. I also liked the Napa cabbage slaw, which also contained shredded carrots, diced green peppers, fried noodles, and sunflower seeds in a light vinaigrette. The fries were pretty average restaurant fries – pretty sure they were frozen. Good not great.

Philip was craving a burger, so he settled on the fairly pedestrian bacon cheeseburger, hickory grilled and topped with Applewood smoked bacon, cheddar cheese, lettuce, tomato, pickle, and onion, and also served with fries. His comment was that he probably should have gotten something else – not because the burger was bad but because it was just a basic burger, nothing special, and he probably should have gotten something more interesting for blog purposes.

By the time we left around 5:00, the crowd was picking up. In its location right by Interstate 75 and in a town that’s still relatively short on restaurants will definitely keep their business up as long as they continue to serve decent food. I didn’t find that what they were serving was really all that innovative or interesting, but it definitely tasted good and I guess that’s ultimately all that matters. Our food total was $34.93 ($9.99 for the cheeseburger, $12.99 for the fish & chips, and $8.99 for the fried green tomatoes) so right in the same ballpark as similar restaurants – chain or not. Victoria was a great server and we enjoyed talking to her, and the atmosphere is nice. We will go back.

Check out Puleo’s Grille and let me know what you think. 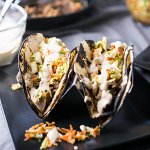