A few weeks ago, I posted the recipe that I use for pizza dough, one that I adapted from Pioneer Woman Ree Drummond’s recipe. PW is one of my favorite food bloggers. I own her first cookbook, and am looking forward to the second, which is set to come out in the spring. She rivals Paula Deen in her copious use of butter and bacon fat, but she also loves gourmet ingredients. I can truly get down with her style of cooking.

Ree is the one who introduced me to potato-leek pizza, in her cookbook. It’s not on her website or I’d link to it. My version is not exactly like hers, but definitely close enough for me to give credit where credit is due.  Buy her cookbook, people!  Unless you’re a vegetarian or on a strict diet, you won’t regret it.  Anyway, this pizza has become our favorite.  It takes a little planning (i.e. we don’t keep a supply of leeks stocked in our fridge) so it’s not one of those “drop of the hat” types of pizzas, but it’s definitely a regular, and we have fed it to guests, who agreed with us regarding the deliciousness of the pizza.

First, you need to make the dough (do this an hour or so beforehand).  Preheat the oven to 450 degrees, with your stone inside if you are using one.  Next, chop up a bunch of bacon.  I use five or six slices for one pizza.  Cook the bacon just till it’s almost crisp, then remove it to drain on a paper towel.

I got a thing goin' on with bacon. Don't tell my husband.....although I think he does too!

While the bacon is cooking, prepare your leeks.  Leeks grow in sand, so they are super dirty.  If you don’t take care when cleaning them, you’ll end up chomping on some grit.  I’ve done it before, and it isn’t pretty.  Don’t skip this step!  Here’s how I do it: cut off the tips and the dark green tops of the leeks.  You won’t need them (but you can save them for stock if you want.  I just toss them).  Slice the remaining leek in half lengthwise, then slice them crosswise into 1/4-1/2 inch pieces.  Set them in a colander, then set the colander in a large bowl and fill with warm water (so you won’t freeze your hand off).  Let the leeks sit in the water for a few moments then give them a swish.  Change the water a few times, waiting and swishing with each change.  I try to separate all the leeks to make sure I get all the grit out.  You’ll probably see the sand fall to the bottom of the bowl (by the way, organic leeks seem to be dirtier than conventional).  When you are finished. lift the leeks out of the water with your hands (so the grit doesn’t fall out on top of them) onto a clean towel, and roll them up in the towel to dry them.  Now, drop your clean, dry, sliced leeks into the bacon drippings and cook them until they are softened.

I used two leeks. Don't use the dark green part!

See that dirt? Don't skip the washing of the leeks!!!!

Stretch your pizza dough (following the directions in my pizza dough post) into whatever shape you like.  Don’t ask me why, but for this pizza I love a rectangular shape.  It’s up to you, though!  Of course, after stretching and shaping the dough, I put it on my hot stoneware pan.  Spray or drizzle the dough with oil.  Now, grab some fresh mozzarella-you do have fresh mozzarella, right?  I wouldn’t skip it on this recipe!  Slice it as thinly as possible and set it aside.

I like a rectangle shape for this pizza, but on this day I made a round one. I probably didn't feel like digging out my rectangular pan!

Wash a couple of small potatoes.  I mean, really, really wash them.  I use a scrub brush then I use a paper towel to dry.  Red potatoes are preferable, but you can use Yukon golds or even Russets.  Whatever you have….don’t complicate things.  Slice the potato as thinly as possible.  I use my über-sharp Shun chef’s knife to do this (I am getting to be a pro at thin slices) but if you are not a handy knife wielder, you can also use a mandoline or even the slicing disc on a food processor.  I don’t bother to peel, but if you are averse to potato skins, by all means, remove them!  Evenly distribute the potato slices over the pizza dough, overlapping to fit.  Lightly salt them….you can also add pepper if you want (I usually don’t).  Now, distribute the mozzarella evenly over the potatoes.  Sprinkle the leeks evenly over the top, then spread the bacon evenly over the leeks.  Pioneer Woman adds crumbled goat cheese at this point in time, but I’m not a fan, so I grate fresh parmesan over.  Bake for 8-10 minutes or to desired doneness.

This is perfect pizza….”gourmet” but delicious and so simple! 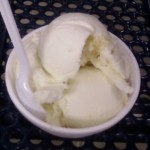 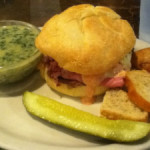