One of my very, very favorite food combinations is potatoes and leeks.  Bacon goes quite well in there too.  And cheese.  I absolutely love potato-leek pizza (as you may have gathered from this post) and my potato-leek soup (or potage parmentier-I’m so sophisticated) is absolutely my favorite soup.  So, last week, while cooking up a pot of the aforementioned soup, I had what I would consider to be a stroke of genius-potato-leek dip.  Potatoes, leeks, bacon, and cheese…..and you can dip stuff in it?  Count me in.  I had to go to the grocery store the next day, so I went ahead and picked up the necessary ingredients.  I was not sorry, my friends….I was not.

Peel, rinse, and chop up a few potatoes-I used one medium and two small Yukon gold-and cook them until tender in salted water, just like you would if you were making mashed potatoes.

Next. fairly thinly slice the white and light green parts of a couple of leeks.  I like to do this part first because leeks are dirty and cutting them first gives me time to soak them while the bacon cooks.  I put them in the basket of my salad spinner, set it down in the bowl, and run warm water over them (warm because I don’t like for my hands to freeze).  I let them soak while I get the bacon going, swishing them around from time to time and carefully separating the layers.  I drain them and put new water over them a couple of times.  Be sure that you don’t pour the old water over the washed leeks-you’ll get the grit right back in them!  If you don’t have a salad spinner, you can roll them up in a towel.  I just gave them a good spin to dry them.

Cut the leeks in half first....

...then thinly slice. Leeks are filthy and must be cleaned!

Thanks for the salad spinner, Melissa!

While the leeks are soaking, cut up a couple of strips (well….I used three) of bacon and fry them till they are fairly crisp.  Remove them to drain on a paper towel, then cook the leeks until they are tender (mine browned a little, and that’s fine). You also need to grate some parmesan and Swiss cheese. This is really to your taste, but you can see my not in the photo caption.

I grated about 1/4 cup of parmesan (on the left) and used all of it....but only about half of the 3-4 ounces of Swiss I grated.

When my potatoes were tender, I drained them in the basket of my salad spinner (no need to dirty a colander!) then mashed them up with a fork in a medium bowl. Once they were mashed up pretty well (no need to obsess!) I added the leeks, the bacon, and the Swiss cheese, plus a couple of tablespoons each of mayonnaise and sour cream. I mixed all of this together and added salt and pepper to taste.

I just love the color of Yukon gold potatoes!

Don't be afraid to leave some chunks!

Spread the mixture into a baking dish (I love my Lodge cast iron gratin dish!) and top with the parmesan cheese. Bake at 350 degrees for about fifteen or twenty minutes, until the top is browned. We ate it with pita chips and it was delicious! You could also use crostini, bagel chips, Club crackers, Triscuits….whatever! It’s your world. 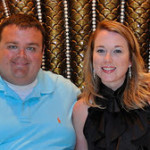 Deciding to be Positive