Porkers BBQ is a downtown Chattanooga mainstay. They’ve been around on Market Street since 1989 and are a go-to spot for Chattanooga BBQ.

Philip and I decided fourteen years ago not to celebrate Valentine’s Day, and several years back (I don’t know, at least eight or nine years) we decided not to buy Christmas or birthday gifts either. It just felt forced to us to “have” to buy each other something when we pretty much bought what we wanted anyway. Philip, however, is a master of giving me awesome things for absolutely no reason, like the Vita-Mix he walked in with one afternoon or the Shun slicer he ceremoniously presented to me after I walked in from a trip to Houston without him (because he’d actually been slated to go on a separate trip but got sidelined due to a surgery). I have walked in twice in the last couple of weeks to find a great book in my spot on the couch, purchased on trade from McKay-the Cook’s Illustrated Baking Book for one, and Michael Pollan’s Cooked for the other.

In Cooked, Pollan recounts his experiences learning about cooking with different elements: fire, water, air, and earth. Cooking with fire = smoking meat, and Pollan learns about traditional Carolina barbecue from a famous pit master. Now, I realize that I am not likely to find Carolina-style barbecue in the Chattanooga area (and you better believe that one of these days I’m going to make it to one of the restaurants he mentioned), but that doesn’t mean that it didn’t make me crave some smoked meat. Seeing as how I don’t have a smoker (yet), this meant visiting a restaurant, so we decided to have some barbecue for this weeks review.

Porkers BBQ has been around on Market Street (near the Choo-Choo) since 1989 according to their menu, but I’m going to go ahead and venture a guess that the visit by President George W. Bush in 2007 is their biggest “claim to fame” (honestly, I’m not sure why presidents always eat barbecue when they visit CHA but at least W was taken to a truly local restaurant….Obama was served Sticky Fingers, which I know, I know, has local ties….but it is not a local restaurant). It’s a decent-sized establishment with black and white checkerboard floors and fifties-style booths with shiny vinyl seats. We seated ourselves and a friendly server took our drink orders while we perused the menu.

I decided to break from my usual barbecue restaurant form and order a plate instead of a potato. I really wanted smoked meat and I didn’t want anything to interfere with the flavor. The plates at Porker’s come with fries, baked beans, slaw, and Texas toast. I ordered pulled pork shoulder. The meat comes unsauced and you can sauce it yourself using the regular or hot sauce in the basket on the table. I tasted the sauce but didn’t love it and decided to eat my meat on its own. It had a nice smoke flavor with a decent amount of “bark” (the dark brown pieces from the outside of the smoked meat). I am not a huge fan of traditional barbecue sides like baked beans (beans should be salty, not sweet), slaw, and potato salad, but I did think that the baked beans were pretty good, with a stronger onion flavor than you usually find in baked beans. The dressing on the slaw was yellow so I assumed that it would taste mustardy, but it didn’t. It was pretty good, finely chopped which is how I prefer slaw (not the long shreds like you get in bagged slaw at the store). The fries were crinkle cut, from frozen no doubt, and were pretty much exactly what you’d expect from frozen crinkle cut fries…not bad but not shout-it-from-the-mountaintop awesome either.

Philip decided to get the brisket, which, not surprisingly, was a little drier than the pork but was just as delicious. It was well-seasoned, very tender, and perfectly smoky with lots of dark barky pieces. He liked the slaw and beans also. We ordered a side of fried okra because we always have to sample fried okra at any recipe. I’ll be honest with you, unless okra is breaded the way I make it at home-tossed in cornmeal and maybe a little flour-I always assume it’s frozen. Those little jackets of breading are too suspiciously thick to make me think anything else. It didn’t taste bad but I just wish everyone would just do it themselves. If the okra is fresh, not frozen I apologize…I’d just like to see more homestyle fried okra in restaurants; it’s indeed a difficult thing to find.

Chattanooga barbecue is something I honestly feel indifferent about. While I have strong feelings about who has the best burger, I could never write a top five barbecue list because I honestly like the meats at most of the barbecue restaurants I’ve tried locally, and Porkers BBQ definitely wasn’t any different. The meat was great, the sides okay. I loved the atmosphere and the service was quick and very friendly. They’re conveniently located for a downtown lunch crowd and they have a good menu selection (which includes breakfast, by the way).

Do you have a Chattanooga barbecue favorite? Tell me about it! 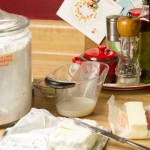 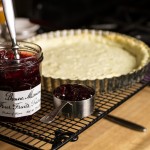