I mentioned a couple of weeks ago that Philip has been working at Sigler’s Craft Beer & Cigars for a while now. Working there, he encounters lots of people who work with beer in lots of different capacities, from vendors to distributors to brewers. Sometimes, it sends us on adventures to restaurants we hadn’t heard of, or at least restaurants that aren’t on our radar. Pie Slingers Pizzeria is one of those spots. There used to be a Pie Slingers Pizzeria on Signal Mountain, but we didn’t make it up there before it closed. I knew there was a location in North Georgia, but I hadn’t even added it to my list until the brewer from Phantom Horse Brewery, which is located inside of Pie Slingers, came into Sigler’s and gave Philip a business card to use for a free flight (sampler, for those of you who aren’t familiar with beer-speak).

Philip couldn’t wait to use it, so we headed down there the next week. It was a bit of a drive – about 45 minutes from our house – but really isn’t that much farther than some of the other North Georgia spots we’ve been to. Just past the Chickamauga Battlefield, it didn’t seem too far out. We got there around 5:00 and it wasn’t too crowded, outside of a large group of people that were there for a birthday party. The place is large and open, decorated with lots of retro radios, eight-tracks, and other retro memorabilia. One side houses some arcade games (which, in the wide open space made the restaurant a little loud – just a warning), and each table is decorated in its own unique way (ours had comic book clippings and miniatures under the glass).

Philip was most excited, of course, about the beer. There’s a tiny little room in one corner of the restaurant where the brews are made. You can order pints, flights (4 4-ounce pours), and crowlers (32-ounce can growlers to take home).

I left the beer perusal up to Philip and focused instead on perusing the menu. I was interested in the house made potato chips ($1.50/$2.95), spiral cut and served with ranch dressing. We ultimately decided to order the beer cheese, made with Ole Green Eyes IPA and Working Girl Blonde Ale ($1.50), and Pretzel Bites ($4.95), made with 1891 Oatmeal Cream Stout. We were expecting teeny little pretzel bites and warm beer cheese dip, but what we got were basically pretzel breadsticks and a cream cheese based beer cheese spread. The pretzel bites were hot, soft, and fresh, and the beer cheese was a little tangy with a little bit of a bitter beer bite. Very tasty!

As for pizza, there were several that sounded delicious. I was interested in the Philly Cheesesteak, with garlic butter base, Philly meat, white American cheese, green peppers, and onions; the Buffalo Chicken, with garlic butter base, house-smoked chicken, blue cheese crumbles, and a Frank’s hot sauce drizzle; and the Nacho Mama, with enchilada sauce base, cheddar cheese, taco beef, and tortilla chips, served with a side of lettuce, sour cream, and salsa. We decided on the Nacho Mama, going for a 12-inch for $15.75 (each pie is also available as a 16-inch and a 28-inch. Yes, you read that right. Twenty-eight inch pizza. We saw one get delivered and it was unbelievably large.)

The pizza took a little bit longer than we were expecting to come out, considering that the place wasn’t very crowded. We did see people come in for take-out orders, so it’s definitely possible that there were a lot of take-out orders that we didn’t see going out. The pizza was hot and fresh, though, so were were really okay. The pizza at Pie Slingers Pizzeria is tossed and formed by hand – no dough sheeter in the place – and it’s thin and a little crispy while still a little chewy. I liked the toppings. The meat was well-seasoned and the cheddar cheese was a nice complement, and I liked that they didn’t skimp on the tortilla chips. The lettuce, sour cream, and salsa were all served in one bowl, and I thought that it would have made more sense if they had been served in separate containers. Actually, I would have liked for the sour cream to have been drizzled over (I often put my sour cream in a plastic bag and pipe it onto my tacos)…but those are just details. The pizza was definitely tasty.

Pie Slingers Pizzeria is a bit too much of a drive to make it a regular spot for us, but if we head down in that direction we would definitely stop in again to try another one of their pies. Philip liked the brews from Phantom Horse a lot and even got a crowler to bring home.

If you’re looking for pizza in the Fort Oglethorpe/Rock Spring area, check out Pie Slingers Pizzeria! 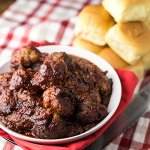 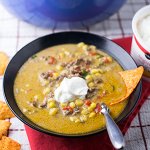