I’ve been asked a few times how I come up with my “list” of restaurants to review. Honest answer? The initial list came from the phone book. Yep. I pulled out the phone book and combed through the restaurant section, using the internet to research whether restaurants were locally owned if I wasn’t sure.

This was an eye-opening experience for me. There are a lot of restaurants out there that I hadn’t heard of prior to April 2011 (I bought my domain name in January 2011 but didn’t write my first post until April). One of those restaurants was Pepper Jack’s on Signal Mountain. I feel like Signal Mountain is kind of a “neglected” area of Chattanooga on Chattavore, probably because it is kind of “isolated” from the rest of the city (though I don’t think I’ve written about a single restaurant in the Ooltewah area-any recommendations for me? I do have a list….). I have been trying to make it to Pepper Jack’s for a while, but the last time that I was really thinking about it was the day that a sudden snowstorm came through and made the roads a little sketchy for a while, so no way were we driving up Taft Highway….

Anyway, up Signal we went today. Pepper Jack’s is a little out of the way, past the Bachman Community Center and across from the Dollar General. I didn’t see a sign on the street but there is a sign on top of the building. But just look for the Dollar General. Anyway, we were seated quickly, choosing to sit outside (in retrospect, probably a bad idea because it was pretty windy and a little chillier than we were expecting-I ended up getting my sweater from the car). Our server, Dee, was with us immediately after the hostess seated us on the porch, taking our drink orders and telling us the specials (fish & chips, chicken livers, and bone-in smoked chicken, Manhattan clam chowder, maple-bacon bread pudding, and carrot cake). She also brought out some cornbread muffins, which were really good. They were very moist and I liked them even though they were a little sweet (which I don’t usually care for), especially since they were served with real. Butter. Amen.

The appetizer menu included such items as wings, jalapeño poppers, fried jalapeños, onion fries, chips and salsa (to which you could add queso for an additional charge), and fried pickles. Now, I actually love jalapeño poppers but you never know how spicy they’re going to be so I was afraid to spend money on something that I might now be able to eat. I considered the chips and salsa….but you know the fried pickles won out. They were nice and freshly fried with a crispy flour coating, but not so hot that they burned the roof of your mouth off. Not too salty but just salty enough. They were served with ranch dressing, which was good….but I think if I order them again I will ask for the ancho chili pepper dressing that’s served with the ancho BLT wedge.

I was seriously considering ordering the smoked chicken special with mashed potatoes and green beans….until I noticed the veggie style stuffed potato. On Dee’s recommendation, I decided to order the stuffed potato, which was topped with steamed broccoli, cheddar-jack cheese, butter, and onion straws (actually, there was some sour cream on there too, but it wasn’t listed on the menu. I would have asked for it if it hadn’t been there, though). The skin of the potato was crusted with salt and the texture of the potato was nice and fluffy. There were plenty of toppings but (unlike the stuffed potatoes served at many of the local barbecue restaurants) there wasn’t so much on top that I had to take some of it off. I really liked the addition of the onion straws. The only issue that I had was that the broccoli didn’t taste like it was seasoned, but Dee brought me some salt & pepper so it was all good.

Philip decided to order the meatloaf, which is “baked with special seasonings, ketchup, and applewood bacon”.  He decided to have it with sweet potato casserole (topped with brown sugar and pecans, no marshmallows) and fried okra.  The meatloaf was good (not as good as mine, but don’t take it personally, Pepper Jack’s.  My meatloaf rocks the house)….very moist with small chunks of peppers and onions.  There was a decent amount of ketchup but it wasn’t smothered.  Philip didn’t really detect the bacon, though.  The sweet potatoes were creamy and I thought that I got a hint of orange flavor in the bite that I tried.  The coating on the okra was pretty uniform so we weren’t too sure it was hand-breaded (not that the menu made that claim anyway) but it wasn’t bad.  The portions were good-sized but not so huge that Philip felt overly stuffed after eating it.

Can you guess what we had for dessert?  That’s right.  Carrot cake.  Okay, no, not really.  Of course we had the maple-bacon bread pudding.  It was very bacony, which is definitely a good thing, and there was a hint of a black pepper taste to it.  Interesting.  The maple flavor was not overpowering; in fact, I thought it could have used just a smidge more maple.  The texture was more like French toast than bread pudding, so it tasted like something that you could eat for breakfast.  I liked it and may experiment with the idea of a maple-bacon French toast casserole (to go along with my eggnog French toast and cinnamon French toast casserole recipes).

The total for our meal before tip was $32.  The server and the hostess were both extremely friendly and the decor was nice, with lots of wood and tin everywhere.  The place smelled like smoked meat, so that was definitely a bonus.  There weren’t a ton of people but definitely a steady stream the whole time that we were there, and a man was working on a deck expansion as we ate our meal.  I will definitely go back to Pepper Jack’s, and I encourage you to go out of your way a little bit to try this place out. 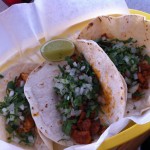 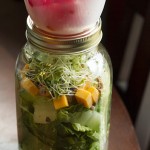 What’s Going on With Chattavore & Some Easy Breakfast & Lunch Ideas…