Okay, I lied. These are not oatmeal cream pies. They’re oatmeal whoopie pies.  Seeing how I’m from Little Debbie Land (McKee Foods is based in Collegedale, near Chattanooga), I feel the need to admit that to you up front.  Still, they satisfy a craving without any questionable ingredients and not one. speck. of processed sugar. Seriously.

For the last three weeks I’ve been on a sugar fast.  I’m trying to avoid eating any processed sugar during the week besides maybe what’s in a square of dark chocolate once a day (I have to have something).  I’ve drastically cut my overall sugar intake, so the only other sugar I’ve been eating during the week is the small amount of honey I put in my coffee and then whatever is naturally occurring in the foods I eat.

This isn’t a “resolution”.  I haven’t made a resolution in….ever. It’s just not something that I do.  It’s kind of like saying, “The diet starts Monday.”  Setting time constraints for when you are going to implement a lifestyle change makes me feel certain from the get-go that I am not going to be successful.  My biggest successes as far as exercising, eating well, losing weight, etc., have come from just saying randomly one day, “This starts now.”  That’s exactly how this happened.  I just decided one day that my sugar intake was a little overboard and wondered if it could have something to do with my out-of-control breakouts.  I mean, at thirty-four years of age I should not be breaking out like I did when I was in middle school…something had to give.  Two-and-a-half weeks into avoiding sugar through the week and drinking a green smoothie every day, I think I can tell a difference….but it was a bad problem and it’s not going to clear up overnight.  Bonus: I’ve lost three pounds.  Yippee!

I give myself a little reprieve on the weekend, but when I decided that I “needed” an oatmeal cream pie I decided that it needed to be recreated to not include processed sugar. When I have some sucanat in the house I’d like to try to make something a little more authentic, but this definitely did the trick for the moment and gave me an excuse to use mascarpone cheese I had in the fridge.  It’s not the same oatmeal cream pie I loved as a kid (and I’ll admit, still love as an adult) but Philip, who is not an oatmeal cream pie fan (he’s more of a fudge round kind of guy) said mine were better.  So that’s my story and I’m sticking to it. 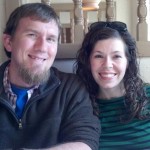