When I was a kid I didn’t like pizza.  No joke.  I don’t think I was awakened to the fact that pizza was, in fact, a good thing until I was about middle-school age, when our teachers would occasionally allow us to partner up with a classmate and order from the nearby Pizza Hut for lunch.  I have no idea what my aversion to pizza was-the sauce, perhaps, or the toppings that my parents ordered (supreme, usually) but I would beg for everyone’s crusts because that was the only part of the pizza I would eat.  Now, I have to admit, pizza is one of my more frequent “impulse dining out” indulgences, since there is a Domino’s two miles from my house.  Admittedly, Bi-lo is in the same plaza, so I should probably just go there and some mozzarella and make my own…but sometimes, I just….don’t. When you’ve had a rough day, carryout is just easier.  You’ve all been there.

There aren’t an awful lot of places in this area making pizza from scratch so I was intrigued when I saw the storefront for New York Pizza Department pop up across from Wal-Mart in Hixson.  I don’t remember what was there before it came in or if anything was there at all, but I remember wondering if it was to be locally owned or if it was a chain/franchise.  One day last summer Philip and I were out and about and realized that we needed to eat, so we stopped there.  I checked on my phone and came to the conclusion that New York Pizza Department was a chain, presumably because there were several other locations that popped up in the search engine.

Since then, several people have suggested that I blog about them, and I once told someone that I wouldn’t blog about them because they were a chain.  He called me out, saying that he was pretty sure they were not a chain, so I messaged them and found out that they are indeed locally owned.  The owners are originally from New York and saw a need for true New York-style pizza in this area.  They decided to name the restaurant New York Pizza Department because of their family ties to first responders in the New York area and to honor those who served on 9/11 and continue to serve-in New York and around the world-as first responders, armed forces, etc.  Since my dad is a firefighter and my grandfather was an officer in the Air Force, I love the nod to those who make these sacrifices for others.

Since we are still recovering from the holiday eating frenzy, we weren’t looking for a huge, rich meal.  Pizza seemed a perfect answer to our burgeoning hunger, plus we had a coupon for a free entrée from our Adventures in Dining guide.  We had tried to go the week before Christmas, but they were packed out with shoppers (I am not exaggerating…people were lined up to the door).  They were pretty crowded when we went in…I guess we hit the last of the lunch crowd at 1:45 because I snagged the next to last table then suddenly all the tables around us were open.  When you walk in, there is a wrap-around line with pizzas displayed in a case.  You choose your pizza (stromboli, etc.), order, and sit down, then someone calls you to a window several minutes later to give you your order.

There’s quite a selection of pizza, but on this day the Blue Light Trooper (ahem, BLT) pizza caught my eye.  If you are a regular reader you will understand why BLT pizza reeled me in (um, my love of bacon and the story in this post).  The Blue Light Trooper is a slice with sauce, mozzarella, bacon, tomatoes, and lettuce/light mayo on request (which, of course, I ordered….you can’t have the “L” without lettuce!).  Now, these slices are huge and I can’t imagine how someone can eat two, which is what is included in the daily lunch special (2 slices of cheese and a drink for $6.95) but the guys behind us each had 2 slices plus garlic knots, so I suppose it can be done.  I did well to finish this slice.  There was plenty of bacon, which was definitely a good thing, not too many, not too few slices of Roma tomatoes, chopped iceberg lettuce, and a light drizzle of mayo.  The crust is thin and crunchy but chewy at the same time (not cracker-y like what you would find at Crust).  Quite good.

Philip decided on the Blazin’ Brooklyn Buffalo, with tomato, mozzarella, grilled chicken, Buffalo sauce, and ranch dressing.  When the slice first came out, he did not think it had enough Buffalo sauce on it…you couldn’t see the sauce, so I am not sure if it was under the cheese or not, but he didn’t taste it, so he went up and asked for more.  The guy at the window generously drizzled the sauce over the top of Philip’s pizza…I mean, he covered Philip’s pizza with Buffalo sauce, which Philip declared “more like it”.  He really liked the pizza but would have preferred it with blue cheese dressing since he feels that Buffalo and blue cheese are pretty much the perfect pair….and he didn’t like it as much as the first Buffalo chicken pizza he ever had, at Portland Pie Company in Portland, Maine…but I don’t think anyone is ever going to measure up to that pizza.

We also had an order of six garlic knots with a side of marinara.  The marinara here is slightly spicy, a little chunky, and perfectly seasoned.  Very tasty.  The garlic knots were not quite as soft as they were the time we ate here before, but instead just a little bit crispy on the outside (which was still a good thing) with a nice amount of garlic butter and parmesan sprinkle on the outside.  Not overpowering and not swimming in butter like the garlic knots that you order at some restaurants.

New York PIzza Department’s menu lists seventeen specialty pies plus cheese, Sicilian, and top-your-own (slices ranging from $2.75 to $4.50-I think and gigantic whole pies ranging from $14.95 for plain cheese to $25.95 for the 911, which has tons of toppings).  They also offer sandwiches, calzones and strombolis, pinwheels (fillings rolled up into dough like a cinnamon roll), salad, appetizers, and desserts.  Our order was $11 and some change, including our garlic knots, $0.50 for a side of marinara, 2 drinks (which was part of the coupon stipulation) and my slice.  Philip’s slice (which would have been $4.50) was free with the coupon.

I have seen people argue over who has the best pizza in Chattanooga.  NYPD? Crust? The Pizza Place? Lupi’s? Honestly, they all serve a different type of product, so it would really be impossible to declare a winner.  I think all of the above are excellent pizza restaurants, making their products in-house, putting lots of thought into their menu, and serving up great pizza to a city that is anxious to devour locally-made products.  It all comes down to taste, and I have to admit that I love them all.  I love pizza.  New York Pizza Department has definitely filled a niche in the Hixson area that needed to be filled and Philip and I were commenting that they probably need to expand their smallish space to accommodate their customer base which is apparently growing quite large.  Good for them. 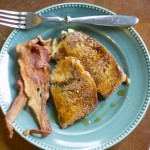