One of my earliest posts on here was about a restaurant named Wisteria Café, located in Middle Valley. It was a “Southern cooking” restaurant with some modern twists (my first meal here was a fried green tomato BLT with pimento cheese) and while the food was great there were also some clear issues. The restaurant didn’t last long, and early this year Philip and I noticed that the sign in front had changed from “Wisteria Café” to “Mountain City Café”. Not too long after it was featured in the Dining Out section of the Chattanooga Times-Free Press, touting a new owner and a new chef. We saw it again in the Dining Out section this past weekend and decided to give it a try today.

Today, the sign when we walked in said “Seat Yourself”-I am going to assume that when it is crowded (which I have heard it is at times) that you have to wait to be seated. We chose a seat near between the entrance and the kitchen and waited for the server, who quickly brought us a menu and our waters (although we did find out when we left that technically they were still serving breakfast when we arrived and we did not get a breakfast menu). The special of the day was breaded, fried pork chops (with bread and two sides) along with chili and a chicken gumbo on the soup and salad bar, which can be purchased on its own or added to any entrée.

The lunch/dinner menu is fairly small, with a few appetizers (mostly deep-fried items like pickles and chicken tenders), a few sandwiches (a burger, a tuna salad sandwich, a grilled cheese, and a few others), and some entrées. There are several “country-style” side items, like mac and cheese, fried okra, and pinto beans. I decided on the fried chicken with mashed potatoes and broccoli salad. Our server gave us a bread choice of rolls, cornbread, or both. We decided on both. The rolls were yeast-style but I am pretty sure they are not made in-house…the square shape is too perfect. The cornbread came in muffin shapes. It was slightly sweet but not bad (here’s the thing, though….we’re spoiled by the cornbread I make in a cast-iron skillet replete with butter, bacon grease, and cornmeal and flour that I grind myself). I was disappointed by the “whipped spread” that was served alongside the bread instead of butter.

The chicken was a gigantic boneless chicken breast that seemed to be freshly battered and deep fried to a golden brown color. It was nicely seasoned, tender, and crunchy. I really did like the chicken a lot. The broccoli salad had cheddar cheese, sunflower seeds, pecans, raisins, and a slightly sweet mayo-based dressing. I absolutely adore broccoli salad and found the flavor of this salad to be quite good. The broccoli was cooked, which I thought to be a little odd (I use raw broccoli in my broccoli salad) but it was very tasty. The mashed potatoes were undersalted (I honestly didn’t think they tasted like they had any salt in them at all) but the texture and flavor were okay (although I make mine a little creamier). Once I added salt they were fine. I thought the brown gravy tasted like the kind that comes out of an envelope.

Philip decided on the meatloaf with fried okra and fried apples. The meatloaf had a thin layer of ketchup-based sauce on top and didn’t have a lot of big chunks (onions, peppers, etc.) in it, which is definitely a plus in our book (I don’t put “chunks” in my meatloaf). I thought the meatloaf tasted like it could have had just a touch more salt in it, but the flavor was good. This is one of the few places that we have found in Chattanooga that actually fries their okra from scratch rather than out of a freezer bag, so that was impressive. Their okra is batter-dipped and deep-fried rather than the more traditional Southern cornmeal-coated, shallow-fried okra, but it was tasty and crispy. The apples were pretty good, but Philip did suspect that they may have come from a can (the sauce was very thick and “cinnamon-y”).

We picked up a breakfast menu on the way out. They have pretty standard breakfast items-biscuit sandwiches, gravy and biscuits, meats and eggs, and pancakes. They also serve a cheese omelet and a “redneck eggs benedict” which features country ham, cheddar cheese, and cheesy hollandaise sauce. The cashier told us that breakfast is served on Saturdays until noon, although the menu says it is served all day. There were also several cakes featured on the dessert menu, which, if I am not mistaken, are made by the owner’s mother. The featured cakes were key lime, Coca-Cola, orange-pineapple, and coconut (and maybe one more we can’t remember). We considered ordering some Coca-Cola cake but were feeling a little too full for it. Next time.

This is pretty decent “Southern” cooking (though I wouldn’t consider it 100% homestyle). I am interested to try some of their other menu items (like the burgers, the chicken & dumplings, and the desserts). We’ll definitely give it another try. Next time I’d really like to make it in time for breakfast….I feel you can really judge a restaurant’s quality by how well they do basic breakfast items like eggs, biscuits, and gravy. I say….give it a try and decide for yourself! 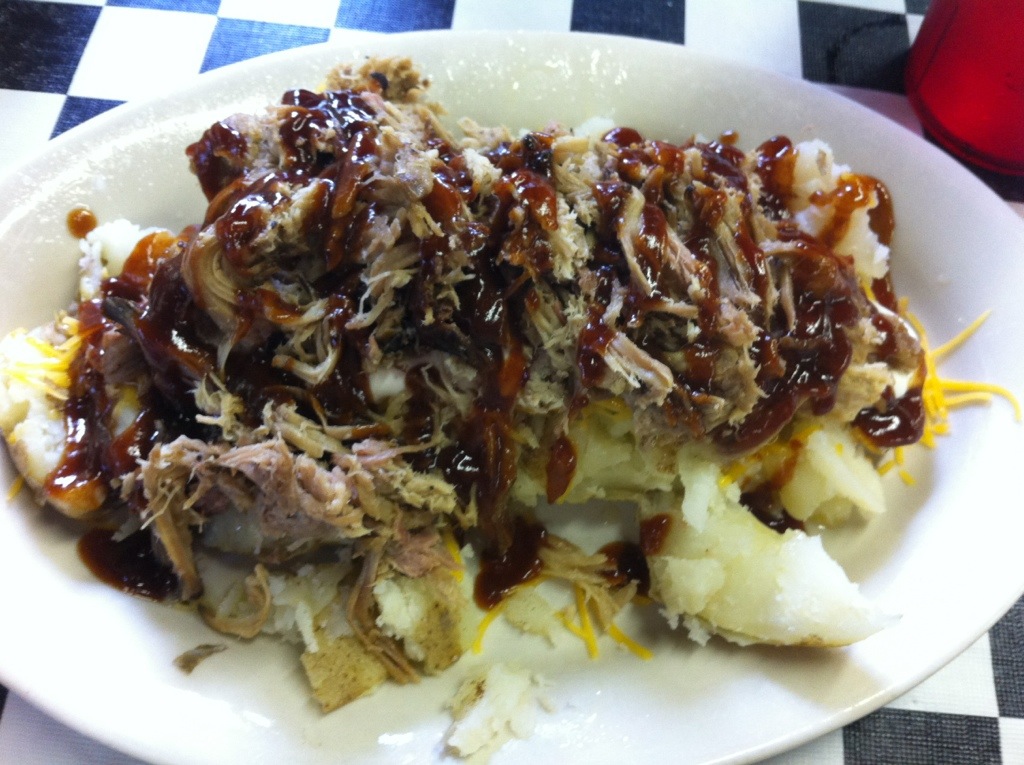 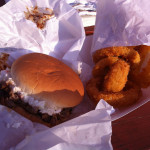