It’s a little bit embarrassing to admit that Mojo Burrito has been around in Chattanooga for ten years now and I am just now getting around to eating there.  Ten years exactly, in fact.  They were celebrating the ten-year anniversary this weekend at the St. Elmo location (the celebration is still going on today, 10/21, with giveaways, live music, and food/drink specials, FYI!).  It’s been a while since we’ve been to a restaurant with a menu like this (burritos, nachos, tacos, etc.) but Q’Doba was always our go-to, since I used to work on Brainerd Road and Philip used to work at Unum….the two former locations were very close to our workplaces.  Sorry, Mojo Burrito!  We’ve learned our lesson (and that was before we were local-food-obsessed, anyway).

As I called out the names of restaurants that needed to be checked off of my iPhone list, Mojo Burrito caught Philip’s attention.  We needed to head to Greenlife to pick up some maple syrup anyway, so the location (Dayton Boulevard at Signal Mountain Road) was convenient, and a huge plus was the fact that, as I looked at their website, I discovered that they buy as many local products as they possibly can.  Off we went.

Now, I have to admit…I never order a burrito.  Ever.  Anywhere.  Generally at places with similar menus (Q’Doba, Moe’s) I’ll order nachos, but the fish tacos also caught my eye.  It took me a second to make a decision but for the sake of comparison I decided to go ahead with the Macho Nachos, a huge plate of white tortilla chips covered with pinto or black beans (I chose black), queso sauce, pico de gallo or tomatoes (I chose pico), green onions, fresh or pickled jalapeños (I passed on the jalapeños), and sour cream.  You can also add meat for $1.99 to $2.40 (steak costs more than chicken or chuck) or sub veggie chili for the beans for an additional $1.25, which the staff member making my nachos suggested I may want to try next time.  Duly noted.  Embarrassingly, I’ll admit that I ate almost the whole plate.  They were delicious!  Everything tasted so fresh.  The tomatoes in the pico were very fresh and I got the feeling it was freshly made; there was a great balance of ingredients-tomatoes, onions, jalapeño, and cilantro.  The black beans were perfectly cooked, firm like black beans should be.  The chips were thin and crispy, which I love, and the queso was also a perfect thickness and spiciness.

Unlike me, Philip almost always orders a burrito when they are available.  He decided on the signature Mojo Burrito-chicken or ground chuck (he chose chuck), black or pinto beans (he got black) and Spanish rice rolled up with toppings in a large flour tortilla.  Philip topped his burrito with cheese, sour cream, pico de gallo, and fresh jalapeño slices.  The gigantic burrito was served with a basket of chips and salsa.  The salsa was the texture that I like-thin and not chunky-and had a perfect level of spice for someone who doesn’t like her tastebuds to be seared off but thinks that salsa should burn just a bit.  The burrito was stuffed full but not so full that Philip needed a fork to eat it.  He was really impressed by the flavor of the meat, which had an interesting seasoning to it and is locally produced, which makes me wonder if it is grass-fed (which also lends an interesting flavor).  He stated that it “wasn’t as good as Delia’s”, but (a) he orders chorizo at Delia’s; and (b) you can’t really compare a place like Mojo Burrito to an authentic Mexican joint.  Apples and oranges.  He really liked it, though.

Because it was Saturday, the Red Bank location was serving 99-cent tacos (the St. Elmo and East Brainerd locations feature 99-cent tacos on different days of the week).  Next time I visit, I will probably try the fish tacos (fried tilapia on flour tortillas with lettuce, jalapeños, pineapples salsa, and remoulade, served with rice and beans).  They also have delicious sounding quesadillas (including spinach), salads (side, spinach, and taco), and appetizers (like Texas caviar, which is made with black-eyed peas).  Our total for the nachos and burrito was about $16 (we drank water).  It’s a very vegetarian and vegan-friendly establishment with lots of options already in place and others that can easily be adapted.  The cashier explained (unprompted) the policy of buying everything that they possibly can locally (which is probably the reason that the menu says prices are subject to change-I am sure that the prices are subject to availability and market prices, and I’m okay with that for local products) and that all of the artwork in the restaurant is local as well.  Even the table tops in the dining room were made by local artists!  They also have a patio for outdoor dining.

A restaurant with a philosophy of giving as much support as possible to other local businesses and individuals is the kind of restaurant I want to support.  Remember that at restaurants like this you are not only supporting that local business and its employees but the owners and employees of every local business that they support.  I truly believe in keeping my food dollars as local as possible.  Their food is so fresh and the atmosphere unique and interesting.  We thought it was fantastic and we’ll be back! 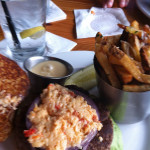