One of the downsides of my job is that I don’t get a whole lot of chances to go out to eat (many if not most of my meals are eaten in my car) and definitely not at any place that doesn’t have on-site parking. And with my job, I get a lot of days off, but certain excursions take some forethought and planning. Like visiting Mindy B’s Deli.

Mindy B’s, located in the Volunteer State Building on the corner of Georgia Avenue and MLK, is open from 10-3, Monday-Friday. There’s parking in Patten Parkway, but I never assume that in a spot with limited parking that a spot is going to be easy to come by. Plus, we like to park and walk. On one of my last days off (as you’re reading this, I went back to work last Thursday) we headed downtown and parked in one of the lots near Unum and walked over. It’s always nice when a lunch excursion helps me accumulate some steps on my Fitbit!

We got to Mindy B’s around 12:45 or 1, thinking that we would hit the end of the lunch crowd. As it turns out, there were several occupied tables, but there was only one lady in line ahead of us, but after we sat down, a pretty steady stream of people came in, resulting in a line that took a while to dissipate. We sat down and took in the atmosphere. There were about nine or ten tables (give or take) inside with a couple of bistro tables outside. The walls were painted in a bright green with tin panels along the bottom half. You walk up and grab a laminated menu from a basket on the counter to decide on your order; the front of the counter is painted with chalkboard paint and the daily special and desserts are listed on the chalkboard. A refrigerated deli case contained lots of salads, like potato salad, egg salad, broccoli salad, herbed tuna salad, and tarragon chicken salad.

Mindy B’s holds a contest every year where customers can submit a sandwich idea. Honestly, I can’t remember how the winners are chosen, but I assume that customers vote (someone tell me please!). The winning sandwich makes it onto the menu. I decided to order the 2012 winner: Chris’s Rockefeller. The Rockefeller was made on sourdough toast with corned beef, pastrami, roast beef, cheddar, pepper Jack, lettuce, and “rock” sauce. While the Thanksgiving (turkey, cream cheese, and cranberry sauce), the Big Cheese (pimento cheese on pumpernickel), and the Coop (tarragon chicken salad with lettuce, tomato, and onion on sourdough) all sounded tempting, I have a hard time passing up anything that contains corned beef or pastrami, so both? Count me in! The Rockefeller was delicious, with waaaaaaayyyyyy more meat on it that I should eat in a day (but: cured beef!). The cheese was not melted but the heat from the bread had softened it up a little bit. There wasn’t a cumbersome amount of lettuce on it, and the Rock sauce was a mayo-based sauce that was just a little sweet and a little spicy. On the side, I had the broccoli salad, which had everything that broccoli salad should have: broccoli (of course!), dried cranberries, red onions (which I could do without, but they were in fairly large pieces so I ate around them), and bacon, plus walnuts, lightly dressed with a mayo-based dressing.

Philip ordered the Pub, aka the Reuben, because he pretty much has a rule that he has to order the Reuben wherever he goes. I’m not going to lie, he still says that the Vine Street Market Reuben is the best he’s had, but he thought that this was a very good Reuben. It was a good-sized but not overwhelmingly large Reuben with a good balance between the meat, cheese, sauerkraut, and sauce. He really liked that they had actually put a thin slice of meat between the sauerkraut and the bread to keep the sauerkraut from making the bread soggy. He had a bag of cheddar jalapeño chips with his sandwich.

Mindy B’s has a build-your-own sandwich option, so you can have whatever you want. There are also several sandwiches that are part of a pick-two combo. Salads are also available-a “plain ol'” salad or a build-your-own, where you add a main (meat or pimento cheese), a cheese, vegetables, and a dressing to a bed of greens served with house crostini. You can also build a three-salad plate with salads from the deli case. Mindy B’s also serves a good selection of desserts, including brownies, cookies, and pies, which all looked amazing, but we have been on kind of a junk food bender the last few days and we needed to slow down so we abstained.

Mindy B’s is a friendly atmosphere with very nice people serving up quality deli food. It’s obvious that the downtown workday lunch crowd loves them! If you’re downtown and want a great salad or sandwich, Mindy B’s Deli is a great option! By the way, our total for our sandwiches, my broccoli salad ($3), and Philip’s chips ($1.50) was about $22 (we drank water). 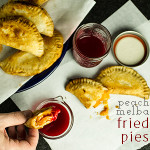 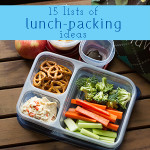 Lunch Packing Ideas for Back to School!