Mimi’s Deli & Bakery is a great, family-owned sandwich shop and bakery in Hixson, Tennessee. I think they have the best sandwiches this side of the county!

A few years back, Mimi’s Gluten-Free Market opened up in Hixson, right next door to O’Charley’s. Though we aren’t gluten-free, we went in several times then sort of inexplicably stopped going…I have no idea why. They carried quite a few products that we couldn’t find anywhere else without having to drive to Whole Foods or Earth Fare. They mentioned to us on one visit that they were hoping to eventually add housemade sandwiches and baked goods to their offerings…then one day we drove by and noticed that the place was no longer Mimi’s Gluten-Free Market but rather Mimi’s Deli & Bakery.

So it turns out Hixson wasn’t quite ready for such a niche market, and the family that owned the shop decided that rather than close their business they would change their business into a restaurant. It took me a while to go in, though I’m really not sure why. Let me be clear….this isn’t Mimi’s Gluten-Free Deli & Bakery, though you can have your sandwich on gluten-free bread if you so choose, and the bakery case is full of gluten-free options like big, gloriously iced cupcakes, brownies, and cake pops (plus a few gluten-full items for those of you who are a little frightened of the gluten-free offerings).

In the back of the space, there’s still a small area selling some food items, including prepared gluten-free breads and frozen items and baking items. The rest of the place is full of tables. The seating is ample, so you can find a spot after you place your order and pay at the counter. The menu items are written on a gigantic chalkboard wall, but for details you can grab a menu at the counter to peruse. There are sixteen sandwiches, five hot dog options, burgers, salads, soups, and sides.

The lady at the counter recommended the cheesesteak, with sliced beef, onions, peppers, Provolone cheese, mayonnaise, and a house seasoning blend on an 8-inch hoagie roll. I have a hard time passing up a well-made cheesesteak, though they are admittedly difficult to find. I am usually sorely disappointed by cheesesteaks that are full of tough meat, not enough cheese, and barely cooked vegetables served on a dry and overly crunchy roll. This was not one of those sandwiches. The meat was perfectly cooked-so tender and deliciously seasoned. The vegetables were caramelized with just a tiny bit of crunch, and there was a ton of cheese melted on top. The roll was chewy but soft enough to bite through and the whole thing was hot and fabulously delicious. I’ve been watching my caloric intake, but I threw that out the window for this meal and ate the whole thing. And I didn’t regret it even a little bit.

Philip is a sucker for a Reuben, so he took the lady’s other recommendation and ordered the Reuben (the traditional Reuben with corned beef, not the California Reuben with turkey). The Reuben was made on grilled marbled rye with corned beef, sauerkraut, Swiss cheese, and house made Russian dressing. Everything was well-heated through (unlike some other places that serve Reubens with cold corned beef in the center where the grill just doesn’t quite get) and the ingredients were well-balanced-not too much or too little of any one item. The Russian dressing was tasty…the best Reubens are always made with house made dressing. We also ordered a basket of hand-cut natural fries, which were tossed with house seasoning. They were skin-on, which you guys know that I love, perfectly cooked, and deliciously seasoned.

One other thing! I had to take a picture of the ketchup. Unfortunately, a lot of times when you eat in restaurants you are assaulted with cheap food-service ketchup (a lot of times that’s bottled as “fancy ketchup). Not here. The ketchup was Hunt’s! My BFF is a ketchup connoisseur, so I had to text this to her as I knew it would make her smile.

I’m going to take a leap here and tell you that Mimi’s Deli & Bakery has the best deli sandwiches in Hixson, at least from what we’ve experienced.

The people were very friendly and are obviously committed to serving a quality product. The prices were good as well-for our sandwiches and fries (we drank water), we paid about $17. There were quite a few people in and out while we were there, so this place is not a secret…but the service was impressively quick. Get to Mimi’s, you guys! 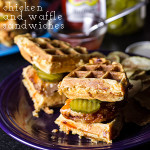 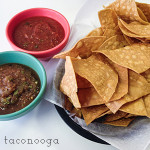