Mike’s Smokehouse on South Broad Street in Downtown Chattanooga serves great barbecue in a cozy setting!
March is almost over, y’all! Let me fill you in on what I’m doing in April…I’ve challenged myself to eating in for the month of April. That’s right – no dining out! I’m going to focus on freezer meals, make-ahead meals, and creative ways to use leftovers. Don’t worry, though – spring break is next week and I plan on getting ahead on restaurant reviews before April hits!

Okay, on to Mike’s Smokehouse. I’ve been meaning to try it ever since we ate at Mike’s Pizza and Burgers in Fort Oglethorpe, when our server told us that Mike was the Mike of Mike’s Hole in the Wall and Mike’s Smokehouse, where all of the smoked meats for the pizzas were prepared. I had a bit of a craving for BBQ this weekend, so we headed down to South Broad.

The log cabin that Mike’s Smokehouse is in has been a barbecue restaurant for as long as I can remember…most recently, I believe it was Sweeney’s, but I think it’s been others in the past (don’t quote me on that, though). When we arrived around 2:00 on Saturday, the parking lot on the side of the building was full, so we parked in the back. There was a family waiting to be seated, and we waited about five minutes to be seated. They seemed to be a little short-staffed in the dining room, as it was basically full and there were only two servers working.

We perused the menu and decided to order the pulled pork egg rolls ($7.99) with pulled pork (obvs) and spicy slaw wrapped in an egg roll wrapper, fried, and served with Alabama white sauce. These were fried to a perfect crisp and the flavor of the pulled pork and slaw was awesome, though the spicy slaw eventually got to be a bit much for me. The white sauce was a little thicker than what I make, peppery and with just a bit of a bite. By the way, if you want to make pulled pork egg rolls at home, I might know someone who has a recipe…

Since a BBQ stuffed potato is my standard barbecue joint order, I decided that I had to order the pulled pork potato ($6.99). This potato is topped with pulled pork, butter, sour cream, cheese, and sliced green onions. The potato itself was actually coated with the house dry rub, which I thought was a nice touch that set this potato apart from those served at other BBQ restaurants where I’ve had a stuffed potato. The pulled pork was extremely well seasoned with the rub and honestly didn’t need any sauce. It was excellent – very tender and flavorful, some of the best I’ve had. The potato was well cooked and the toppings ample. This potato was huge, as barbecue stuffed potatoes tend to be…I only ate half.

Philip decided to go for a barbecue plate. He wanted pulled pork but decided to get a combo plate ($11.49) with the brisket as well so we could give it a try. He also got macaroni and cheese, which I had read rave reviews of on Yelp, and fried okra, of course. We couldn’t decide if the fried okra was frozen (my guess is yes) but it was pretty decent. The macaroni and cheese, on the other hand, was obviously house made, as prepackaged mac and cheese always has a suspiciously creamy sauce with no sign of actual cheese. This was like what you’d be served at a Sunday family dinner, though I would have liked a little more cheese and seasoning on it. The brisket, which they refer to as “Texas-style”, was well-seasoned with the dry rub and extremely tender. Again, the pork was pretty much perfect. They know how to smoke some meats.

As I mentioned, the servers seemed a bit slammed so the service was a little slow, but they were very friendly and were obviously doing the best they could do. The food did come out pretty quickly, though. The atmosphere is cozy, as the dining area is divided up into three separate spaces in the log cabin. The prices are about average…our total for our meal was $28 and some change pre-tip. This was some of the best barbecue I’ve eaten in a restaurant around here, so I’d recommend that you give them a try soon! 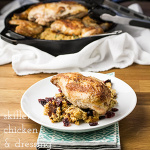 Chicken and Dressing in a Skillet 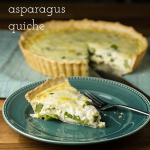