Mike’s Pizza and Burgers is a popular hotspot for (what else) pizza and burgers (and chicken sandwiches and hot dogs!) in Fort Oglethorpe, Georgia!

Update (keep scrolling past the fried pickles for my original post!): Turns out Mike’s is a pretty good place for chicken sandwiches and hot dogs, too. Who knew? All of the burgers at Mike’s Pizza and Burgers (as well as Mike’s Hole in the Wall) are also available with grilled or fried chicken. I tried the Faith (with American cheese, honey mustard, and Mike’s wing sauce) as a fried chicken sandwich on a whim a while back and it turns out that I loved the chicken sandwich version even better than the burger. The chicken is super crispy and just a little bit spicy…it’s perfectly cooked and all of those toppings just go perfectly with chicken. I always get the wing sauce on the side for dipping. This is definitely one of the best chicken sandwiches that I have had at a local restaurant!

On our most recent visit, Philip got the Gluttony Dog, which is a jumbo hot dog wrapped in bacon and topped with chili and cheese. It was gigantic, guys! He couldn’t finish it, it was so big. The toppings all worked so well, though Philip (who recently stopped taking his daily Prilosec) was a little concerned about heartburn. I don’t think it turned out to be a big deal, though.

You know what I love? When I have a restaurant on my “short list” and an email shows up in my inbox offering a Groupon or Living Social deal for said restaurant. That happened this past week with Mike’s Pizza and Burgers. People had mentioned after I published my burger list that I needed to check out Mike’s, which is on Battlefield Parkway in Fort Oglethorpe, and the stars aligned. It’s Fall break, we needed to go to Costco anyway, and GROUPON!

Now, let me say up front that Mike’s Pizza and Burgers is not eligible for the burger list because it is not in Hamilton County. I have to have a way to keep it as simple as possible, y’all. It’s okay, though, because as I was checking out their menu on the website I noticed that some of the burgers sounded awfully familiar. I checked out the menu for Mike’s Hole in the Wall (#8 on the list) and it turns out that the logo is the same too. Same Mike! And to top it off, our server told us that Mike recently opened Mike’s Smokehouse on Broad Street in the former Sweeney’s location. I’ve noticed it while driving by a couple of times recently…I’ll be sure to give it a try soon, and I’m hoping that Mike can make that location a success!

Anyway, back to pizza and burgers. We were a little concerned going in at 12:30ish that it was going to be crowded, especially given the fact that the Groupon deal had just come out. It wasn’t crowded, though there were quite a few tables occupied. There’s a sign to seat yourself; Haley, our server, quickly brought us our menus. We ordered waters (they serve beer, but Philip wasn’t terribly interested in any of the craft beers that they had on draught and we have like 50 beers in our basement that need to be consumed) and cheese bread-thin breadsticks with mozzarella, cheddar, and parmesan, served with marinara sauce (the Italian egg rolls, hand-rolled with pepperoni, salami, ham, mozzarella, & provolone served with marinara sauce, sounded delicious but also very filling so we decided to pass those up). The cheese bread was very cheesy, thin, both chewy and crispy. Quite tasty.

I couldn’t decide between pizza and a burger (all burgers, by the way, can be served with grilled or fried chicken instead of a beef patty if desired), so we decided to try both. That’s the beauty of a Groupon! They offer a lunch special, either one slice and a salad or two slices and a drink (priced depending on which pizza you order) but we decided to get a whole 12-inch pizza and take home the leftovers for lunch the next day. You can build your own or order one of Mike’s creations. We were interested in the bacon cheeseburger pizza (crumbled bacon, ground beef, sliced tomatoes, red onion, cheddar cheese, mozzarella, topped with yellow mustard), the chicken bacon ranch pizza (chicken, crumbled bacon, mozzarella, marinara, topped with ranch dressing-I’m somewhat obsessed with this combination right now), or the Boss Hog (hand-pulled smoked butt-from the Smokehouse, ground sausage, Canadian bacon, ham, mozzarella, marinara, and Mike’s wing sauce). With all that pork, Philip couldn’t pass up the Boss Hog. It was a good choice, guys. It was totally packed with meat and incredibly cheesy. The smoked butt was deliciously tender and smoky, the sausage well cooked and not overpowering, and the sauce was spicy but not overdone. The crust was very thin with a crispy yet chewy edge. We each had a slice then boxed it up and moved on to the burger.

We decided to split a classic cheeseburger (with cheddar-you can choose your cheese from American, cheddar, Swiss, blue cheese, or pepper Jack), just to see how it compared to the burger at Mike’s Hole in the Wall (though I was tempted to try the Faith, with lettuce & tomato, bacon, american cheese, honey mustard & mike’s wing sauce). The burger was über-thick and cooked well with a great flavor to the meat, and the cheese was melted nicely on top. The condiments were not too heavy, but you guys know how I feel about lettuce and tomato on a burger (I lost the onions on my half, of course) and I ended up taking those off when my burger half started falling apart. Everything was served on a Niedlov’s bun, which Haley told us Mike brings in fresh daily. Burger rating: bread, 5; cheese: 5; meat: 4; toppings: 3.5; size: 4; structural integrity: 3; overall rating: 4.08. The fries, just like those at Mike’s Hole in the Wall, were excellent: hand-cut, double-fried, a little bit of skin on, skinny, lightly seasoned…basically perfect. I had to make Philip move the plate so I’d stop eating them.

Mike’s Pizza and Burgers is a nice space, fairly spacious and nicely decorated, at the end of a strip mall. There are some arcade games to keep the kids entertained. The menu is small and well executed. The prices are competitive with similar establishments; for our cheese bread, 12-inch Boss Hog pizza, and burger with fries (which are $1.99 extra) the pre-tip total for our meal was $30.24….just 24 cents over the total for our Groupon. Woohoo! Haley was a friendly and attentive server as well. We really enjoyed our lunch at Mike’s Pizza and Burgers and will try to go back when we are in the area! 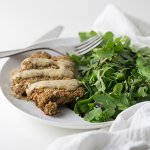