Merv’s Burgers recently opened a new location in Soddy-Daisy, Tennessee. The burgers definitely lived up to the expectations set by the original location!

If you’ve lived in Chattanooga for a while now, chances are that you have heard of Merv’s Burgers on Mountain Creek Road. They claim to have the best burgers in Tennessee and a lot of people contend that they have the best burgers in Chattanooga. While you probably know who tops my burger list, Merv’s is on there with their classic burgers. So when it got out that Merv’s was opening in Soddy-Daisy, just about ten minutes from my house, I was pretty excited.

The new Merv’s location opened in February in a location that, unfortunately, has seen a lot of turnover in the past several years. It was a classic meat and three, Ronnie’s Restaurant, for years and years before Ronnie decided to hang up his hat and move on. Since then it’s been two different Mexican restaurants, an Italian restaurant, and a couple of other things. The location seems cursed, which is odd because Home Folks across the street has been there since I was a kid. We decided to go and check it out for lunch with my brother on his birthday.

They’ve done a lot of work inside. It’s been painted and metal panels have been installed on the walls, which is a nod to the Mountain Creek Road location. There’s a dining space and a pool hall space. They have a “seat yourself” sign, which I appreciate because you guys know I can’t stand when I walk in to a restaurant and I’m not sure if I should seat myself or wait to be seated. Our server, Shana, approached us immediately to get our drink orders while we perused the menu (we all went with water).

The menu at Merv’s Burgers is pretty basic: appetizers, salads and wraps, burgers and sandwiches, sides, and entrees. Philip’s eyes lit on the pork rinds on the appetizer menu, and at $2.99 it seems like we couldn’t possibly pass up freshly made pork rinds. For those of you who don’t know, yes, pork rinds are pieces of fried pig skin. These were fresh out of the fryer when they came to our table, still crackling and popping like crazy. They tasted like porky salted air. I honestly have never been much of a pork rind fan, but then I’ve never had them freshly made. These were delicious.

We all three decided to go with burgers – no big surprise there. I’d like to know how many meals a day that Merv’s serves that are not burgers. I had a L’il Merv with American cheese and no onion, Philip had the L’il Merv with cheddar and bacon, and my brother went for the gusto with a regular Merv burger with American cheese, grilled onions, and bacon. Here’s the thing about a Merv’s burger…they’re so simple that it almost seems too simple. There’s no fancy bun, no special sauce, no out-of-the-ordinary toppings, no swanky meat. And it’s it that simplicity that the Merv’s burger shines. With their irregular shape, they’re obviously hand-patted, cooked up just to doneness on the flat-top, cheese melted on top, and toppings judiciously done (i.e. the condiments and toppings don’t slip and slide all over the place).

We split a large order of fries ($4.99) and the basket was more than big enough for the three of us. Merv’s seems like the kind of place where the fries would be an afterthought, just a necessary but neglected menu item, something that goes beside the burger. That’s not the case, though…the fries are hand-cut, skin-on, and perfectly cooked and seasoned. I have a love affair with hand-cut fries, for those of you who don’t know.

I read some reviews on the Facebook page, and some of them were a little negative, not so much about the food but about the service. However, those reviews were all posted within the first couple of weeks that this location was open, so I have to guess that they were probably really busy and they were probably just getting their sea legs. Our food came out very quickly and Shana was very attentive.

To cap it all off, the three of us ate burgers, fries, and pork rinds (we drank water) for $29.31 pre-tip. That’s three adults eating in a non-fast food restaurant for under $30, and that’s not bad. There was a steady flow of diners coming in to eat lunch, with others coming in to shoot pool. I don’t drive that way often, but I’m guessing that they’re doing a pretty good business at night too. I guess it’s too early to tell, but I’m thinking that Merv’s might break the curse of that location. 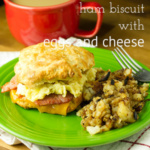 Ham Biscuit with Eggs and Cheese 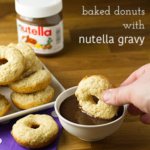