In the week and a half that Philip has been out of town, I have probably eaten out more that I had eaten out in the two months prior.  In fact, last night I was supposed to meet my mom for dinner and actually called her and asked her to come to my house so I could cook for her, since I realized that the only non-restaurant dinner that I have had since last Thursday was a Lean Cuisine that I ate Tuesday night before logging on for my class.  Alas, she had already invited my brother to meet us there, so I now officially have eaten restaurant food for 8 days straight minus one which was a frozen entree.  This is not a good record to be setting.  I will be cooking chicken parm at my parents’ house tonight, though, and Philip will be back on MONDAY (cue balloons here) so I am making a grocery list!!!!  All that to say, I have three separate restaurant review posts to put up in the next three days.  Obviously, I have eaten out at more than three restaurants, but this is a local restaurant review blog, so those are the ones you get!

On Sunday, Philip’s dad was taking his (Philip’s, that is) mom out for Mother’s Day lunch after church.  They called and invited me to go along, and his dad (whom I’m pretty certain is enjoying reading my restaurant reviews) suggested that I choose the restaurant so that I could blog about it.  I consulted my list, which is three pages long, with each page containing about three columns worth of restaurants that need to be reviewed.  I’m going to be busy for a while-but I digress.  I just couldn’t decide.  Philip and I never, I repeat never go out to eat after church on Sunday, let alone with any type of holiday crowd, so I had a complete freeze-up.  So, I gave my list to his mom and suggested that she choose a restaurant.  She chose Biba’s, an Italian restaurant near the Publix in Hixson, and we decided that El Metate would be our back-up (they had never eaten there!).  When we got there, though, it became quickly apparent that lots of other mothers had the same idea.  We opened the door, saw the crowd, and made a beeline for El Metate, where we were seated immediately.

El Metate is mine and Philip’s favorite place-besides our house, of course-to eat Mexican food.  I have never had bad service there, and the food is always good.  Because we like to gorge on queso dip, Philip and I almost always order just tacos, otherwise we end up feeling like Violet Beauregarde when she turned into a big blueberry and had to be rolled out of Willy Wonka’s candy factory.  However, since Philip’s parents and I did not have any queso, I was free to order off of the menu at will.

I chose to have fajita nachos (I think they’re actually called nachos con fajitas or something like that, but it was five days ago, so you’ll have to forgive me) with both chicken and steak.  That was actually the special that day.  The fajita nachos have queso (see, I got my queso anyway!), peppers, onions, tomatoes, and whatever meat you choose over chips.  I have ordered them before and really liked them.  One of my friends actually got them with shrimp once.  Look for them on the fajita part of the menu, not the nacho part.  I ate almost the entire thing-all of the chips and meat, just left some of the peppers and onions.  I don’t know if this serving was smaller than what I’d had before, or if I was just much fuller before because of the Violet Beauregarde effect.  Anyway, they were fantastic!

Philip’s dad chose fish tacos.  Now, if you haven’t had a fish taco before, you may be cringing.  Lots of people-the majority of my family included-think it sounds like the most terrible idea ever.  In fact, Philip did not take to the idea immediately the first time I made them.  Give them a chance!  They really are great.  Anyway, the fish tacos were simply grilled (or at least I think it was grilled) tilapia, with pico de gallo, a choice of corn or flour tortillas (he chose corn, as would I), and a side of rice and beans (although he decided to forego the rice).  Quite different from what I make (I’ll post my recipe sometime soon) but simple and from his report quite tasty.

Now for the big mamma-jamma.  Philip’s mom ordered the “special dinner,” which she got for half-price since it was Mother’s Day.  The special dinner should actually be called the special dinner for a family of four.  It included a taco, a tamale, and enchilada, a chile poblano (also called a chile relleno at some Mexican restaurants), rice, beans, and some other item I can’t recall.  Maybe a chalupa or gordita or something like that.  Anyway, she had no less than three-that’s right, three plates-in front of her.  When they brought the third plate, I was fairly certain her eyes were going to pop out of her head.  Needless to say, a to-go box was in her future.    Actually, she ate the taco and whatever the item that I am unsure of was, a few bites of everything else, and boxed all the rest of it to take home-for her and Philip’s dad to share!  I’m serious, that’s how much food there was!

As usual, the service was great.  Everyone is always very friendly there.  They are very quick, and they keep your drinks FU-U-U-L-L-L.  I appreciate that, as I am always in a race against the clock to make sure I drink enough water, then I feel like Violet Beauregarde anyway, but that’s a different matter.  Many of the servers (come to think of it, I am fairly certain that my server at either location of El Metate has always been a man) are jokesters.  It’s not a gourmet restaurant, but it’s good food.  I definitely recommend it! 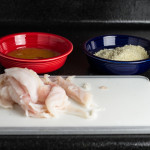