12/16/12 I am not sure what happened….but MST closed their doors on 12/1/12.  It seemed very sudden and was definitely disappointing given the quality of the food and their wonderful new location.  It made me very sad!

Philip and I have a nine-year-old Halloween tradition: stay as far away from home until the danger of trick-or-treaters has past.  I know that sounds mean, but really there’s a good reason behind it.  See, the first year that we lived in our house, we bought two gigantic bags of candy.  And had about five trick-or-treaters.  This, of course, meant that we were stuck with massive amounts of candy leftover.  We figured out that since we live very close to three large subdivisions, all the trick-or-treaters go there instead.  We decided after that to make an effort not to be home…that way, we didn’t feel the need to buy candy for the few trick-or-treaters who might be out just so we’d end up with a ton of candy that we’d then feel the need to eat.

Since we had a Living Social deal to Market Street Tavern, it seemed like a perfect opportunity to check out their new location.  If you’ll recall, we visited there in February and their shrimp & grits unseated Food Works’ as Philip’s favorite.  That was a big deal.  One of the few “negatives” that I had to throw out was the decor, leftover from the Italian restaurant that was located there prior to MST.  They have now moved across the street to the old Hardie and Caudle building, next door to Fork and Pie Bar.  Their new location is much more conducive to a “tavern” atmosphere, with dark wood floors and simple dark-top square tables.  The new location is basically one large rectangular dining room with the bar located in the front, a row of tables along one side (with booth seats running along the wall and chairs on the other side), and tables in the back.  A sign said to have a seat, so we did.  Our server, Kelsey, was with us almost immediately.

They’ve revamped (read: simplified) their menu in a way that would make Gordon Ramsay proud (if you’ve ever watched Kitchen Nightmares, you know what I’m talking about.  Do a few things and do them well.).  MST now has nightly specials, like wings and pitchers on Monday; Pimp-Your-Mac on Tuesdays (basically designing your own mac & cheese creations), which made me sad that Halloween did not fall on a Tuesday;  jazz and wine night on Wednesday (though there was no jazz when we were there because someone had broken in to the restaurant on Tuesday and Wednesday had been a bit chaotic with getting that taken care of); sliders on Thursday; and Sunday brunch; there may have been more but I don’t remember.  All the nightly themes/specials are listed on a chalkboard when you walk in the door, and there are many menu items listed on another chalkboard in the dining area.

Gouda Mac & Cheese (and the base for “pimp your mac”!); courtesy of Holt Webb Photography/Market Street Tavern

As I perused the appetizer section of the menu (okay, it’s called the “snacks” section), I was really dying to try the Dixie trio: pimento cheese with bacon, roasted corn spread, and warm bleu cheese served with MST’s fabulous house-made chips.  I decided in the end, though, that I shouldn’t overdo it since I still had salted brown butter rice krispies treats at home and knew I would want one later.  That is definitely on my “to-try” list for later.  They have also replaced the fried pickle spears that I had on my last visit with fried pickle chips.

It was not easy for me to decide on an entrée.  I seriously considered ordering a pimento cheese sandwich but after sampling the little cup of pimento cheese (they actually use roasted red peppers-like I do!) decided that while it was good, I wasn’t really in the mood.  I then began teetering between the LaFrieda (Pat LaFrieda is a renowned NYC butcher) burger (chuck and short rib meat) and the fried green tomato po’boy (fried green tomatoes, Benton’s bacon, avocado, lettuce, and comeback sauce, which Kelsey described as “kind of like Zaxby’s sauce but a little spicier”).  I finally decided on the burger, which I ordered “Tavern-style”, which meant that it came with American cheese, lettuce, tomato, and comeback sauce (the other “styles” are Jalapeno Jack, Bleu, BBQ Gouda, and Chipotle).  Since I am obsessed with homemade potato chips, I ordered those as my side, with a cup of comeback sauce to dip them in.  Can I just say I wasn’t disappointed with my choice?  I’ll definitely have to try the po’boy on another visit, but the burger was fantastic; cooked perfectly, cheese melted just right, great balance of veggies, delicious meat, and sauce, all piled on a Niedlov’s bun.  The comeback was very similar to Zax sauce but even better, just a tinge spicy and wonderful with the chips.  I ate the entire burger and almost all of the chips.

Philip considered the garden burger, which is made with whole grains and is vegan (and was highly recommended by our server) and then the fried chicken (which he decided against when he found out that it is chicken tenders).  In the end, though, he ordered the shrimp and grits.  Once he decides that he really likes a menu item at a restaurant it is very difficult for him to order anything else.  The shrimp and grits were just as he remembered them-three fried grit cakes (made with local grits from Falls Mill) with shrimp and Benton’s bacon in a smoked tomato butter sauce-except that he thought there may have been a little less sauce then the last time he had them (which he did not view as a bad thing).  There was a nice ratio of shrimp to grits to sauce-not a couple of dinky shrimp plopped on a huge stack of grit cakes-but, like last time, he was not able to eat the third grit cake.  When we left, he declared that their shrimp and grits are still his favorite.

A much better photo of the shrimp & grits; courtesy of Holt Webb Photography/Market Street Tavern

I love the new, small menu at MST.  I love that they are really focusing on interesting themed specials and doing a few things really well-and with as much local food as possible.  All of the staff was extremely friendly and Kelsey was an exceptional server.  Holt, the night manager (who also took the photos for the website) emailed me almost immediately after our visit to offer photos and any additional information to assist me with my blog post.  We really loved the new atmosphere and the openness of the new location, as opposed to the three different rooms in the old location.  All in all, this was a great experience and, like before, I highly recommend Market Street Tavern.

Market Street Tavern is located at 809 Market Street, Chattanooga, TN 37402.  You can call them at 423-624-0260.  Find them on Facebook and Twitter or check out their website/blog at http://marketstreettavern.wordpress.com. 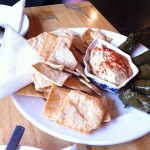