Well, kiddies, spring break is almost over.  This teacher is feeling a little sad.  While winter break is two weeks long and sates me for a little while, fall and spring breaks are just a blasted week and always leave me longing for more, especially when the weather is colder at the end of March than it was in December and I spend the whole week trying to hide out in my house wearing knee socks and fuzzy slippers to avoid freezing to death.

Finally on Thursday the weather started warming up a bit, enough to be outside without a coat at least.  Philip and I went downtown to St. Mark’s United Methodist (in the north Chatt area) to check out their Faith Marks exhibit (about the spiritual meaning behind people’s tattoos) with out friend Rachel.  Very, very interesting (you may not know that I am married to a, um, tattoo enthusiast, or that I have a couple myself).  After checking it out, we headed to the North Shore for dinner.  Not too many places left in that area that haven’t been blogged about, so it came down to North Chatt Cat or Marco’s.  Obviously, Marco’s won.

We got there around 6:45 or 7 and were seated immediately.  Our server, Frank, quickly took our drink orders and let us know the specials: housemade butternut squash ravioli with either cajun cream sauce or citrus pesto, and some variety of filet (I think it was filet, anyway….definitely a steak of some sort).  We set to perusing the menu, which consisted of appetizers, salads, chef’s specials, create your own pasta, pizzas, and desserts.

Frank brought us some bread, an herbed focaccia with olive oil, balsamic vinegar, herbs, and red pepper for dipping.  It was pretty tasty and I especially liked the crunchy outside texture of the triangles.  I decided to order a half spinach salad (spinachio on the menu), which is definitely out of character for me since it contained goat cheese, which is just not my thing.  However, it also contained pancetta, dried cherries, and roasted walnuts, which are all my thing, and was served with a tangy red wine honey vinaigrette.  Full disclosure, I don’t really care for goat cheese because it tastes “musty” to me, but combined with all of the other delicious flavors in the salad, I didn’t find the goat cheese at all off-putting and it may have inspired me to try goat cheese (in small amounts) in combination with other strong flavors to see if I can increase my appreciation of it!  Philip decided on a half Caesar (Appassito insalata Caesar) on the menu, which was a grilled romaine heart served with creamy Caesar dressing and a gigantic parmesan cracker (a frico).  The menu said there were croutons with the salad but there were not any on his, though with the crunchy parmesan croutons were not necessary.  The creamy dressing was really good and the frico was delicious.  Philip liked it but I do tend to prefer a more traditional chopped romaine Caesar.  Rachel decided on a cup of the bisque di pomodoro, tomato basil bisque drizzled with olive oil.  It was slightly creamy, thick, with visible pieces of basil.  I didn’t taste it, but Rachel enjoyed it.

As soon as Frank announced that butternut squash ravioli was a special I knew what I was going to order.  I decided to top it with the cajun cream.  It also came with sautéed spinach in the middle.  The spinach was garlicky and perfectly cooked.  The portion of ravioli was perfect, just enough for dinner so I wasn’t stuffed after.  The raviolis had a decent amount of filling, not overstuffed but not skimpy either, and the filling was sweet and squashy.  I liked the cajun cream but wish it had been just a little more spicy.  Yes, I’m a bit of a wimp, but when dishes are supposed to be spicy I do like to taste at least a little bit of spice.  I would have liked a tangible amount of grated parmesan (instead of the powdery white stuff you can see here) on top. Still, I liked this dish and would order it again.

I didn’t take Philip long to settle on the chicken piccata, which is chicken breasts pounded thin, lightly breaded and sautéed, and topped with a light lemon-caper sauce.  Marco’s serves theirs on a gigantic bed of arugula.  Frank asked Philip if he wanted to sub a side for the arugula…apparently a lot of people don’t notice that part of the menu and are taken aback when the chicken arrives atop all that arugula.  Philip, however, loves arugula and definitely wanted it.  There was definitely a lot of arugula and a good-sized portion of chicken.  The sauce was lightly drizzled over the whole dish.  It was light and lemony, not overpowering, and the arugula was very fresh and not wilty at all except in the spots where the warm chicken had touched.  Philip really liked this dish and would definitely order it again.

Rachel decided on the baked ziti, ziti mixed with tomato-meat sauce and baked in a crock with mozzarella on top.  Wow, this was a large portion.  Rachel didn’t make it through too much of it and took home probably enough for at least two meals.  There was a ton of cheese on top….I don’t know how “traditional” that is (or how traditional baked ziti is, for that matter) but I definitely never argue with a blanket of mozzarella.  The pasta was not swimming in tomato sauce but was nicely coated and there was a good amount of meat, though it was sausage, not beef, which is what I expect in a meat sauce around these parts. I tasted the pasta; the sauce had a strong tomato flavor and the cheese was nice and melty, though I avoided the meat because I’m just not a fan of Italian sausage.

Philip saw crème brûlée on the menu and knew he had to have it before we had even ordered our meal.  He sees crème brûlée on a menu and develops a one-track mind.  The crème brûlée was good, flecked with vanilla bean with the whole cold/warm dynamic going on, but it wasn’t turning cartwheels great.  It was crème brûlée, and you really have to do something amazing with crème brûlée to really blow me away since it’s one of those things I can make at home (restaurant meals tend to become less impressive when you start cooking everything at home).

I liked the food at Marco’s but it was a little pricier than I expected; I had a bit of sticker shock over the end bill, about $45 before tip for my & Philip’s meal (2 half salads, a pasta special, the chicken piccata, and the crème brûlée). …but we don’t usually order dessert so I guess that’s what kind of threw us over the top.  Frank was friendly and attentive as were the hostesses and the atmosphere was pretty nice.  If you are on the North Shore and looking for some Italian food, give Marco’s a try! 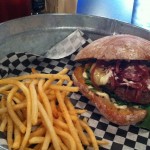