This macaroon ice cream is made with coconut milk, so it’s dairy free. It has chocolate chips and coconut and it tastes like a Samoa Girl Scout cookie!

Boy, I used to hate coconut. Well, I say I hated it…but I really only hated the texture. I loved the flavor of coconut, but the texture…ick. In high school, my best friend, with whom I spent pretty much every waking second (we were kindred dork spirits), used to liken the texture of coconut to crayon shavings. And since for high school aged girls we spent a ridiculous amount of time coloring, crayon shavings were something we knew well (and I still love to color…why do you think I love teaching preschool so much?).

Anyway, I always lusted after coconut cakes with their fluffy whipped icing but wouldn’t lay a finger on them. I wouldn’t eat Samoas, those lovely caramelly Girl Scout cookies, and the mention of a macaroon did nothing but evoke thoughts of the Henrik Ibsen play “A Doll’s House” that we read in tenth-grade English (the main character, as I recall, ate a lot of macaroons, which had symbolism I could not understand at the age of fifteen). I did not develop an appreciation for true literature until much later, so I wasn’t too interested in thinking about Henrik Ibsen. For reals.

Actually, I’m not really sure when I changed my mind about coconut, but I’m pretty sure it had something to do with coconut shrimp. There is just something so sublime about the combination of shrimp, with their briny sea-water flavor, and the tropical crunch of coconut that works so well. And so I was sold. Funny, though, this happened without the knowledge of my family. My mom made a cake a few weeks ago and left the coconut off of half of it (my mom takes such good care of me!).

The funny thing about this macaroon ice cream is that, well, it isn’t ice cream. I am not one to split hairs, but those who enjoy such things will argue about the fact that if it contains eggs, it isn’t ice cream….it’s frozen custard. But come on…it’s ice cream. Though my earliest experiences with homemade ice cream were amalgams of cream, milk, and sugar with some flavors, I’ve always been so much happier with the texture of homemade ice cream that includes eggs. I was amazed at how well coconut milk worked in this macaroon ice cream recipe. The flavor is like a macaroon dipped in chocolate, or (dare I say?) one of those sublime Samoa Girl Scout cookies, sans the caramel center. Fresh coconut will take it over the top (and I’ve included directions for dealing with said fresh coconut after the recipe) but if you aren’t up to the challenge (and I’m not going to lie…it’s a challenge), feel free to use store-bought. If you use sweetened store-bought coconut, though, you may want to reduce the amount of sugar in the recipe to 1/2 cup.

Anyway, if, like me, you have discovered the decadence of coconut….make this macaroon ice cream. Immediately.

The prep time includes time to chill the cooked mixture as well as freeze the ice cream.

To break down a whole coconut….

Begin by locating the “eyes”. Drill a hole in two of the three eyes.

Drain out the coconut water. You can discard this, but why would you? Have you seen how much they charge for it in the grocery store? Drink it! If you don’t like the flavor on its own, use it in a smoothie.

Bake the coconut in a 350 degree oven for thirty minutes. Break the coconut open by bashing it-HARD-on a counter or a very hard surface (concrete floor?). Philip actually ended up using a machete to break this one open. This stuff is hardcore!

There’s a dark brown membrane attached to the fruit of the coconut. Peel this off, then grate. I grate the coconut using my food processor. 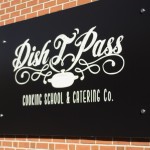 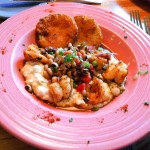