I have always, repeat always hated potato salad. In fact, I pretty much boycott all side dishes that routinely come alongside barbecue: potato salad, baked beans, and coleslaw. We had barbecue for our rehearsal dinner when we got married back in 2001, and I gave my mother-in-law specific instructions to buy chips because I did not eat barbecue sides.

I’ve softened a little…I’ll occasionally put a spoonful of sweet bacony beans on my plate at a cookout, and I’ve learned to like good slaw on top of my barbecue sandwich or tacos. I’ve really never learned to like traditional potato salad, though.

I don’t know what it is about it. I like all the ingredients…potatoes, mayonnaise, mustard, relish, eggs…but something about combining them all then chilling them just weirds me out. I’ve tried, but it turns out that regular old potato salad is just one of those “uh-uh” foods for me.

One of my friends mentioned to me once a while back that a barbecue joint (now closed) that was near my house served “baked potato salad”. For some reason I first thought that baked potato salad was some sort of salad featuring lettuce and a baked potato (what a weird thing to think, right?). I was wrong.

I prefer firmer, less starchy red potatoes to the Russets that are traditional for baking, and, well, I don’t actually bake the potatoes. The name’s not about the cooking method, it’s about the dish that this mimics.

This potato salad is great for the people at your picnic, cookout, or party who don’t like mayonnaise (and I know a lot of those people!). You can buy baked potato salad at some grocery stores, but this is so simple that you won’t bother with spending $4.00 on a teeny little tub with a bunch of ingredients that you can’t pronounce.

This is a great side dish for your 4th of July festivities! Make this loaded baked potato salad and see if it changes your mind (or someone else’s) about potato salad!

Shared on The Weekend Potluck on Served Up With Love and Meal Plan Monday on Southern Bite!

This loaded baked potato salad is the perfect cookout or picnic side dish for the mayo or traditional potato salad hater in your life!

Prep time does not include time to allow potatoes to drain and cool. 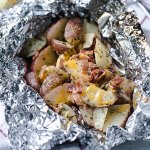 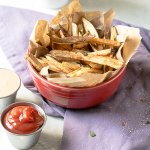