Homemade Cuban sandwiches are a perfect way to use up any leftover pork roast you might have in your fridge. They’re a classic!

This post may contain affiliate links. For more information, please see my disclosure statement.
I’ve written about Cuban sandwiches before, nearly four years ago when I first started writing recipes on this blog. Those were dark days, at least in terms of my photography, so sometimes I like to look back, cringe briefly, and think about how far I’ve come (and still have to go, but I’m doing okay for myself).

I have absolutely no Cuban heritage. I have no idea what the history or the origins of a Cuban sandwich is and at the moment (7:30 on a Friday night after what I can only refer to as a week) I am not feeling much of a desire to research its origins. I do know where I first heard about it…Alton Brown‘s Food Network show Good Eats, which I watched religiously for many, many years until it was taken off the air.

At the time that I first heard of Cuban sandwiches (or Cubanos, as they are sometimes called) I didn’t even really like pickles or yellow mustard, but I remember being intrigued and knowing that I had to try them. I loved them and honestly I think that the more pickles the better (which probably surprises you guys…you had no idea that I loved pickles, did you?). I remember Philip telling me about going to lunch with his team from work once and one of the ladies ordering a Cuban sandwich without the pickles. What the WHAT? Don’t you dare. Okay, do it if you must. But don’t tell me about it.

It’s kind of fun (for me, anyway) that I had this scheduled on the blog this week because we watched the movie Chef the other night. In the film, Jon Favreau is a chef who’s lost his passion and, subsequently, his job and, at the prodding of his ex-wife (Sofia Vergara) starts a food truck where he makes great street food…like Cuban sandwiches. In fact, the name of his truck is Cubanos. The movie was surprisingly good. And what I love about these homemade Cuban sandwiches (besides, of course, the fact that they are super-tasty) is that they come together so quickly, with leftover slow cooker pork shoulder and deli ham and cheese that, yes, are directly out of the package.

I hope you’ll give homemade Cuban sandwiches a try!

Shared on Weekend Potluck on The Country Cook! 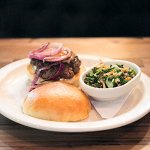 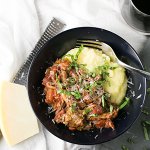