A while back, I posted a recipe for homemade potato chips in the microwave-no special equipment necessary.  Really!  They’re the best, and I never buy potato chips any more.  Ever.  Well, I was making some to take for lunch tomorrow and decided to take it to the next level and throw in some homemade French onion dip.  Potato chips & French onion dip = my favorite snack when I’m sick.  Why?  I don’t know.  It’s just always been my thing.  This recipe takes less than twenty minutes, most of which is microwave time, and much healthier and lower in fat than regular chips and dip.  The recipe is adapted from the book I Can’t Believe It’s Not Fattening by Devin Alexander.

Start by lining a large plate with parchment paper.  Grab a potato or two.  For two servings, you will need 6-8 ounces of potatoes.  I used one medium potato and it was about 7 1/4 ounces.  Scrub and dry the potato (I don’t peel them, but I suppose you could).  Slice them as thinly as possible.

My plate isn’t large enough to microwave all of the chips at once, so I divide them into two batches (this is also handy when you are making them for two people to share).  I weigh mine-just place a bowl on the scale, zero it out, and place the sliced potatoes in…then take out half.  Lay the chips out in a single layer on the plate and spray lightly with oil (I use olive oil in my Misto) then lightly salt.  Microwave for six minutes then check the brownness/crispness and add a minute at a time.  Repeat with the second batch.

To make the dip, you’ll need six ounces of Greek yogurt.  Yes, I made this in my yogurt maker.  If you are interested in making yogurt but don’t want to spend money on a yogurt maker (I got a great deal at Tuesday Morning), you can check out this recipe.  You’ll also need dehydrated onions, onion powder, and salt.  Yes, here I show onion salt….but it was hard as a brick, so I trashed it.  I mixed in a tablespoon of dehydrated onions, 2 teaspoons of onion powder, and 1/4 teaspoon of salt.  Stir it all up….and that’s it!  Healthy-and in my opinion, tastes better than store-bought.  And that’s saying something. 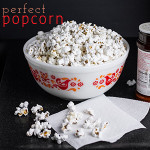