Is there anything tastier than Chick-fil-a nuggets and sauce? Now you can make your own homemade Chick-fil-a sauce and nuggets!

I grew up eating at Chick-Fil-A.  It was one of the few restaurants in our small local mall, along with a Burger King, a Pizza Hut, and a restaurant called “Hot Dogs and More” (guess what they served!).  My grandmother called it “Chick-a-fil” for some reason and I recall always thinking that their logo was really bizarre (for some reason it did not compute with my young mind that it was a black and white line drawing of a chicken’s head).  Guess what?  Chick-Fil-A is the only one of the aforementioned restaurants that is still at said local mall.

It was one of the place that my friends and I frequented in high school, the place where I learned to love waffle fries and real lemonade.  When I worked at Chuck E. Cheese’s sometimes I would go to Chick-Fil-A between school and work and eat delicious chicken in my car. People watching at the tables in the mall is always fun, so Chick-Fil-A was a perfect place to stop when shopping.

Imagine my distress when Philip announced when we were dating that he didn’t eat Chick-Fil-A, declaring it “girl food” (he said the same thing about Glen-Gene Deli).  It took a long time, but he finally wore down.  I still remember how shocked I was the first time that I mentioned while we were out shopping that I was hungry and Philip asked me if I wanted to go to Chick-Fil-A.  What?  He was a believer.  Finally.

I’ve been a lover of honey mustard for a long time, but I’ve always, always despised the honey mustard at CFA.  It’s weird.  For a while, they had a creamy honey mustard that was a salad dressing that I really, really liked, but then they changed that too and I was stuck with eating ketchup or barbecue sauce, which just isn’t the same (by the way, I’ve always been more of a Chick-Fil-A sandwich lover because the pickles and that buttered bun rock my world, but I am a fry dipper).  Die-hard, old school CFA fans love the Polynesian sauce, but it never did much for me.  Then our friends told us about Chick-Fil-A sauce.

I guess it had been a long time since we’d been, or maybe we just didn’t know to ask….but when they told us we were like, “Huh?” We hurried to the nearest Chick-Fil-A (well, within a couple of weeks anyway) and asked for some.  And wow.  Honey mustard and barbecue saucey awesomeness.  For a long time I wasn’t too sure about replicating it at home, but then one day I happened to have some homemade honey mustard and some homemade barbecue sauce in the fridge.  I mixed them together a little at a a time and, well, there you go – homemade Chick-fil-a sauce. 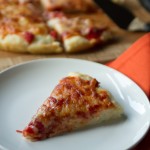 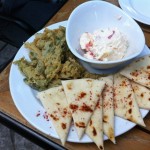