Henpecked Chicken is a restaurant in downtown Chattanooga that serves smoked or fried chicken and boasts “sober chicken and drunken milkshakes”.

Okay, let me know start by saying that I usually give restaurants two or three months to be open before I write about them. The folks from Henpecked, though, had invited me first to the soft opening, which ended up being cancelled, then to a little media party they had. I at first accepted the invite to the media party then canceled because I had family in for just a few days. I promised I’d get in ASAP to try out their chicken, and Sunday proved to be the day.

We had thought about going to the Chattanooga Market, but it had rained and it was sooooo muggy, then I saw a picture of the crowd on Instagram and that sealed the (no) deal. Philip was curious about Henpecked so we decided to make good on my word.

It was around 1:00 on Sunday afternoon when we arrived and while the place was nowhere near empty, there was no one in line. We perused the menu for a bit (you can grab a paper menu from a little pocket hanging on the half wall or look at the big menu boards on the wall) and the cashier, Lauren, kindly answered our questions, explaining to me that the drunken milkshakes could be ordered at the bar and also explaining that, because it was our first time in, we got free house made frozen custard (??????). We placed our order and took our number to our table. Our food was out in less than five minutes.

I decided on the Coop sandwich ($10) – a fried chicken thigh served on a soft bun with pimento cheese, Henpecked sauce, jalapeño bacon, and sweet pickles. The sandwich was huge…I ended up eating only half of it in order to save space for my frozen custard (because yes, I drank probably over half of the milkshake and ate the free frozen custard). The breading on the chicken was delicious and a little bit spicy. The pimento cheese was creamy and pretty traditional. Henpecked sauce was similar to Zax sauce or another slightly smoky, peppery dipping sauce, and the jalapeño bacon was, well, hot, at least for my pedestrian tastebuds. I had the crinkle cut fries on the side plus a side of Alabama white sauce. The fries were pretty standard crinkle cuts…a little crispy but still a little soft. The white sauce was spicier than what I make at home with a more vinegary hit than mine, which is more horseradish and garlic.

Philip decided on the 1/4 Nashville hot chicken ($9.50) with a side of cheddar grits and fries (he initially asked for coleslaw but was told that they were out – a sign over the counter asks for understanding when they run out of their homemade sides). The hot chicken was served in the traditional way – on a piece of thick white bread, which he didn’t touch (he never does). The quarter chicken was a leg and a thigh, and while it was well-cooked and he didn’t not like it, he said that he probably wouldn’t order it again. Essentially, because the sauce that coats Nashville hot chicken is oil-based, he feels like it makes the chicken a little more greasy than he prefers. He liked my sandwich more than his chicken, and enjoyed the fries and the grits though he felt that the grits could have used more cheese.

As for the frozen treats, it was worth a trip just for those. My Bushwacker drunken milkshake ($9.83), with homemade custard, Kahlua, creme de cacao, and dark rum, was delicious, albeit maybe a little dangerous because it didn’t taste alcoholic at all. That said, it might not have contained that much alcohol, so unless you can down several milkshakes you’ll probably be just fine. The bartender, Wes, described it to me as “basically a mudslide” but I describe it as “basically fantastic”. The frozen custard that we got for free for being first timers was amazing as well. It is only available in one flavor (vanilla) but if you get it in a bowl you can also get strawberry or chocolate syrup on it (the syrups are homemade as well). It was creamy and custardy (duh) and had a deep vanilla flavor. I would have preferred a sugar cone to a cake cone (I’ve never cared for cake cones) but it was free and hey, beggars can’t be choosers!

Henpecked Chicken is a tasty, casual restaurant that serves a variety of chicken dishes at reasonable prices, and their ice cream (ahem, frozen custard) is worth a visit. Their staff was extremely friendly. We’ll definitely make a trip back. 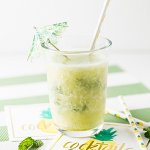 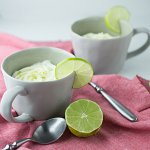