You guys know me…I love a good burger, and any time that I see a new restaurant featuring burgers I get pretty excited. When I first saw the sign for Full Moon American Burger & Bar on the corner of Frazier Avenue and Market Street, I was intrigued; even more so when I read that it was owned by Krist Biba, owner of Hixson’s Italian restaurant, Biba’s.

Full Moon Chattanooga opened in May, but I wanted to give them a little time to work out any kinks in their service before we went in. We went for a visit late on a Saturday afternoon. Arriving at around 4 p.m., well past any lunch crowd but before the dinner rush, we were seated immediately. One server, Tyler (I think it was Tyler? Or maybe it was Taylor?) started us off with drinks and an appetizer then another server, Robert, took over from there.

Of course, the first thing that Philip noticed about Full Moon Chattanooga was the extensive line of beer taps behind the bar. In fact, he sat where he could face them. The beer list is impressive, but be warned: the  Full Moon lager is not a specially brewed craft beer. It’s Keystone Light. Funny.?Anyway, Philip ordered a North Coast Scrimshaw and was happy as a lark.

There are quite a few appetizers on the menu here at Full Moon American Burger and Bar. House made kettle chips, topped with bacon & cheese…Philly cheesesteak egg rolls…pretzels or pork rinds with beer cheese…and several more. You guys know I had to go for the fried pickles, though. The fried pickles were pickle chips, breaded and fried to golden, served with horseradish sauce, for $5.95. They were tasty but maybe a little too salty. The horseradish sauce was just slightly spicy; the horseradish lent flavor but not so much heat.

The menu is further divided into salads & soups, burgers, pizzetas, sandwiches, and desserts. While I considered a Philly Cheesesteak, I ultimately decided that I came for a burger, so a burger I would get. The BBQ bacon cheeseburger sounded pretty tempting, and I had a good laugh at the Werewolf – a burger served between two grilled cheese sandwiches (I would never order that – I’d probably not be able to eat even a quarter of it!). I decided on the patty melt ($9.95), with Swiss cheese and grilled onions on grilled marble rye bread, with chips as my side.

The burger was pretty large (I could only eat half) and cooked to my specifications. The onions were a little more crunchy than I prefer for my grilled onions, but they were a little sweet and pretty tasty. The Swiss cheese was melted nicely. I would have liked for the sandwich to have a sauce (patty melts frequently have a Thousand Island-style sauce). The bread was grilled with butter and was nicely crunchy. The house cut chips were a nice thickness, very crispy with no soft or soggy chips in there, and perfectly seasoned.

Philip thought about getting the Mediterranean Links, grilled veal and beef sausages on pita bread with homemade vegetable spread, feta cheese, and onions. He decided to go for a burger too, though, so he got a classic cheeseburger ($8.95) with lettuce, onions, tomatoes, and pickles, with bison instead of ground beef ($3.00 upcharge). He ordered fries as his side.

We were amused by the fact that the burgers are branded – as in, the top of the bun is seared with a branding iron. There was a proper amount of toppings on the burger – not overdone. The condiments are on the table so you add your own. The burger was nicely cooked, well seasoned, and had a good flavor to it. I am pretty sure that the fries were frozen, but they were the kind that are battered so they’re extra crispy – pretty tasty.

The prices were on par with similar restaurants. Philip got a “tall” beer, which turned out to be $8.50 (!), so don’t cringe when I tell you that our total pre-tip was $37.89 (remember we got an appetizer too). The burgers were good – not the best we’ve ever had (for that info, check out my top ten burgers list), but definitely tasty. The drink menu is good, so it’s definitely a good spot for tourists or locals alike looking for a drink spot. The atmosphere is pretty cool and our server, Robert, was very friendly and helpful.

Give Full Moon Chattanooga a try and tell me what you thought. 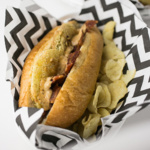